05 September 2014 | By Nick Horth
Ubisoft got themselves in rather hot water with the PC gaming community when it was revealed the The Crew would be locked at 30 frames per second, with a manual fix required to go above that number.

When asked about the situation with The Crew, unsurprisingly Tudor wasn't all that sympathetic. "Oh, well that's lovely of them," he said. "Here we are, running the game at 4K resolution, 12K resolution, personally I've seen the game running at 128 frames per second or something like that. Lovely for them, what a shame."

Slightly Mad are determined to create the best looking racing game around, and Tudor insists that the technology is in place for them to do so. It's all about keeping ahead of your rivals.

“You're doing 4K? Okay, we're doing 12K," he continues. "You've got the Oculus Rift support? Okay, we've got Morpheus as well.” We just want to keep ahead of the game. I know it's a bit... childish? (laughs) But the tech is there – the power of the PC these days, what we're getting out of the consoles, it's phenomenal."

So what kind of performance markers will Project Cars be aiming for? "We're targeting 1080p and 60 frames on consoles," Tudor confirms. "We've got a load of stuff going on on-screen, but that is always the target. Please don'thate us if it ends up at a lower frame rate, but 60 frames and 1080p is always the target for us. If it's going to compromise gameplay or the experience there will have to be balance, but so far we've got crossed fingers."

Project Cars is due out on PC and current-gen consoles this November 21. To find out what we thought about the crowd-funded racer, check out our recent hands-on preview. 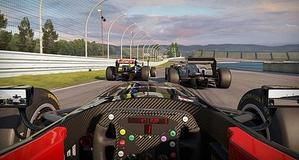