Newell: Valve view their role as "enabling" Steam Machines, not building them 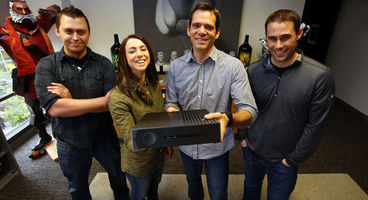 Will Valve be mass producing their own line of Steam Machines to one day rub ports with all the others from major PC makers? Perhaps. Gabe Newell however sees Valve's role as an 'enabler' for them.

They've handled some "very tiny stuff" in that arena as they built 300 Steam Machines for testers. It's more about how they can "collaborate with the chip-makers" for Valve.

Valve big cheese Gabe Newell was speaking at CES 2014 when he distanced the company from pursing their own first-party Steam Machine line, but it's always a possibility.

"We have plans to build more machines, but we also expect that users will be really happy with the range of offerings from these hardware manufacturers,” Newell told those attending his CES 2014 session.

“I mean, we’ve made 300, which is very tiny stuff. You know, we’ll make what we need to. We really view our role in this as enabling. So we’ll do whatever is going to be helpful to other hardware manufacturers – whether that’s with controller design or something specifically tied to boxes."

"It’s very much about how we can collaborate with the chip-makers and the system integrators. What’s the most useful thing for us to do? Part of the reason for holding events like this is to get feedback from them about what are the next problems they’d like us to take on.”

SteamOS and Steam Machine designer Kassidy Gerber has readily acknowledged that Valve is walking hand-in-hand with PC manufacturers because 'they know better' when it comes to hardware and their market's customers.

“Right now we’re not planning to bring the prototype to market,” she said. “It doesn’t mean we never will, but right now we’re really working with third-party hardware to build their own Steam Machines. We think they know their customers and they know hardware better than us right now."

“In the first year of Steam Machines, our main audience is people telling us they want to bring their Steam library into the living room. Right now, there’s no way for people to really do that well.”