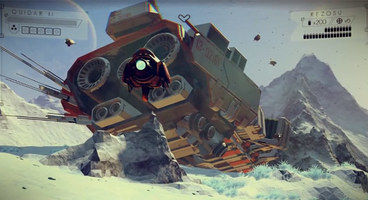 Hello Games unveiled their "insanely ambitious" game No Man's Sky which thrives off procedurally generated content, which is at the very core of its engine. It "frequently scares" studio co-founder Sean Murray.

A creature prototype or ship blueprint can led to vast permutations in shape and size because of the engine's toolset they've spent a year building. It debuted at VGX.

Sadly Hello Games was flooded during the recent freak weather in the UK, which saw hundreds of homes submerged and entire communities trapped.

"We've got all new furniture, machines, everything — and we've taken the opportunity to make it much nicer than it was before," Murray said. "It feels like we've created a little nest, now we have to just deliver this game. No distractions. We've advertised some roles, we want to make sure we have like the perfect team, then that's it, heads down until it's ready."

Now the studio is squarely focused back on No Man's Sky.

"People think we spent a year making a trailer," he said, "but actually we spent a year making a set of tools and an engine that is procedural right at its very core. It's such a different way of working, and I don't think it's been done before. We're at a point where Grant makes a creature prototype, or Aaron makes a spaceship blueprint, then clicks a button and it creates hundreds of thousands of variants. Just this massive grid of every possible permutation of shape, size, texture, color. Every Friday we have this big review, and it's sort of overwhelming. The game frequently scares me."

"For the last year there have been four of us working in a locked room, creating No Man's Sky," he said. "Actually the flood brought us all together, forced us back into a cramped little room — the whole team. It's been really positive, and it's felt like the right time for us to have more people help make this insanely ambitious game."

No Man's Sky is in development for PC and features a procedurally generated open world to explore.