It’s beautiful, boring, and unlike anything else you’ve ever played

Here we are. No Man’s Sky is finally out, I’ve finally had the chance to play it, and it’s finally time to put all the questions surrounding this grandiose game to rest. The game’s theoretically infinite procedurally generated universe sounded impossible, but it exists, and we can explore it. The question that’s always lingered is simply: What do you do in No Man’s Sky? I’ve played it. I’ve seen the end of the goals the game puts in front of you. And honestly, I’m still not sure what you do in this game.

That’s a bit disingenuous, because the things you do in No Man’s Sky–that is, the actual game mechanics–are pretty obvious to anyone who’s played around in a post-Minecraft sandbox. You harvest materials from the world around you, find plans for new tools and abilities, and use those resources to build the upgrades. That’s basically it. Sure, there’s an ostensible goal of reaching the center of the galaxy, or following the guidance of the mysterious Atlas path to its conclusion, but the destinations of those journeys only reinforce that goals aren’t what the game is about. 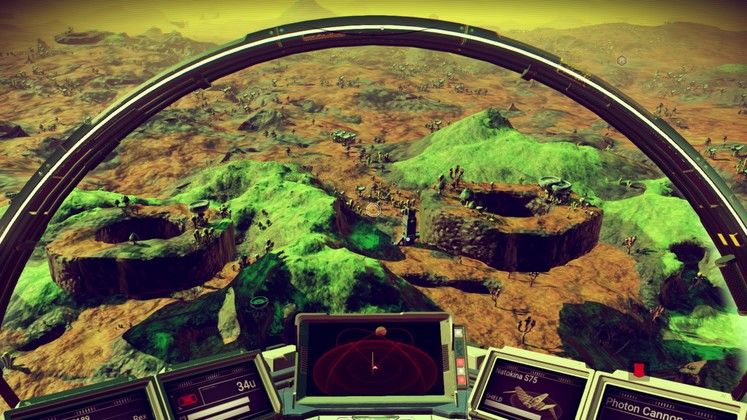 One of quintillions of alien worlds

It’s about exploring, seeing what the next star system looks like, finding the next weird, wobbly little creature, and looking over a thousand alien horizons. No Man’s Sky is a game about being totally alone and feeling both the terrifying weight and incredible freedom of that loneliness. That might all sound a bit grandiose, but it’s impossible to say anything about No Man’s Sky without getting big, grand, high, and mighty. This is a game more about the feelings it evokes than the mechanics it uses or even the fun it can provide.

Suspension Fluid, Electron Vapor, Antimatter, Warp Cells. That loop is the core of what you do in No Man’s Sky. There it is. That’s the answer. Collect Carbon, Plutonium, Heridium, Zinc, and Thamium9, and craft three otherwise useless items into each other to make a bit of fuel for your starship. There’s No Man’s Sky. 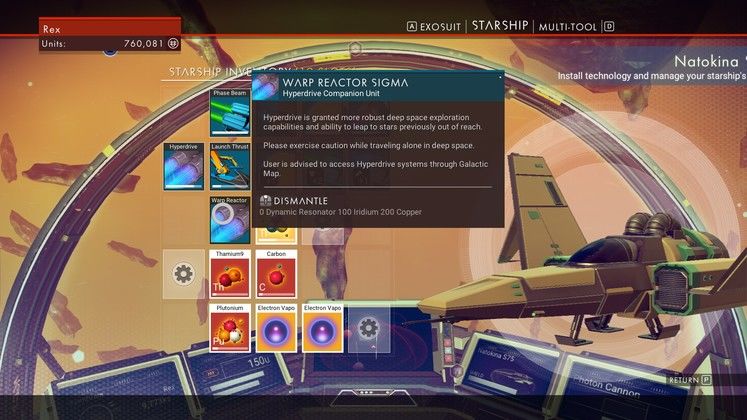 If that sounds tedious, that’s because it is. You have very limited inventory space, and holding the resources necessary to keep yourself fueled will mean constantly managing your limited carrying capacity. You’ve also got ship and suit systems that require more resources to maintain. There are your life support systems, your ship’s thrusters, your omni-tool’s power reserves. All the basic goods needed to keep these systems powered are incredibly easy to find on every planet, just requiring you to take a few steps out of the way to gather some fuel. Still, it’s more inventory management. More busywork. 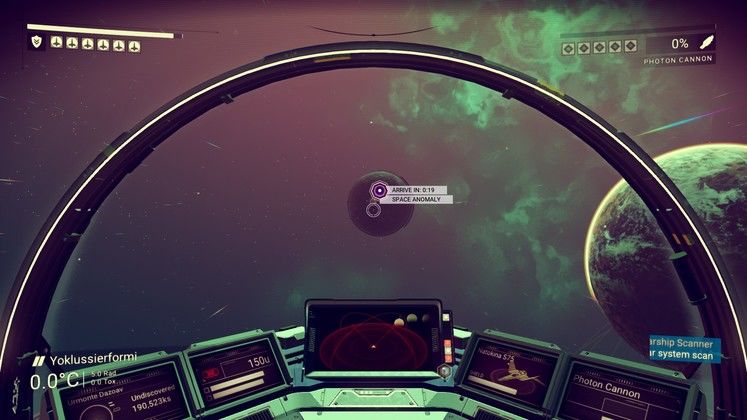 These types of finds are few and far between

When you break down the total elements that make up No Man’s Sky as a video game, the whole thing is a flimsy construction of tedious mechanics that don’t ultimately result in anything that’s fun and rewarding. That’s a very damning criticism.

Yet, somehow, No Man’s Sky isn’t awful. In fact, it has moments where it’s incredible. The central promise of the game, exploring an impossibly huge galaxy, is incredible, beautiful, and mostly well-realized. These alien worlds are beautiful, with horizons painted every color of the rainbow and creatures of every stripe. Some of these planets are sulfurous hellholes, some are oceanic water worlds, and still others are vast, green things teeming with life. 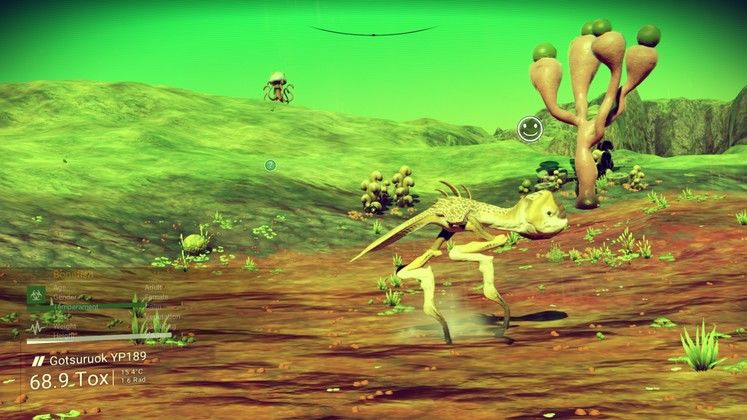 Seeing these worlds isn’t cool because the universe is infinite, but rather because there’s an element of finiteness to it. The game’s minimal online hooks have you uploading the planets and creatures you’ve discovered to a central server, where they’ll live on theoretically forever, waiting to tell other players who stumble across your path that you planted your flag here first.

You’re not just randomly stumbling around random worlds. You’re randomly stumbling around random worlds that others will find arrayed in the exact same order. If you look at No Man’s Sky purely as a simulator of scale, of utter, incomprehensible largeness, it’s amazing. Breathtaking, even. Flying from star to star captures the feeling of being inside the Powers of Ten video, and of looking up at the night sky and trying to decipher exactly how big the universe is. 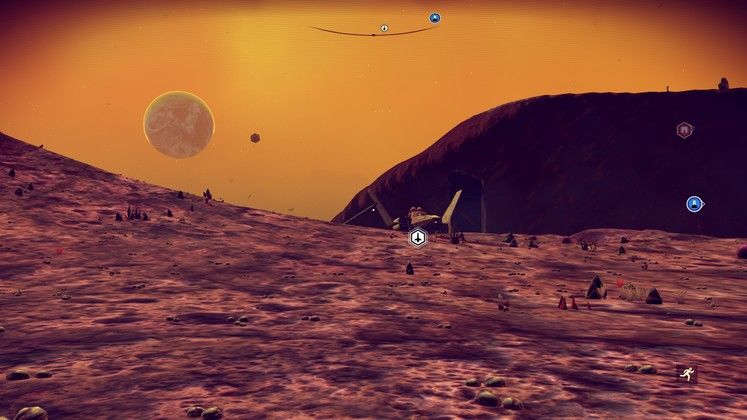 Once again heading to the stars

Yet what is there to find out among all that vastness? Every star system has one of the same handful of space stations. Every planet has the same selection of resources, the same abandoned buildings, and the same types of NPCs manning lonely outposts out on the infinite frontier. These alien artifacts offer promises of vast mysteries, questions you’ll never find the answer to.

The small bits of storytelling in No Man’s Sky indicate that that’s the point. You aren’t supposed to find answers. You aren’t supposed to have a destination. It’s about the journey. It’s about wandering endlessly. It’s about not finding things, but simply seeing them. The impossible size of of the game means that those things are often beautiful, yes, and awe-inspiring in their scale and volume, but the space between those moments of awe is often boring and tedious.

No Man’s Sky was performing very poorly on its initial release, but a series of patches have ensured that those issues have mostly been ironed out. PC players used to the finest in visual fidelity will likely be annoyed by the draw-in while flying around in atmosphere, but that seems to be an inescapable consequence of how the terrain is generated. Otherwise, performance has gone from iffy to terrific over the course of my time with the game. Despite early problems, the PC version is now an excellent way to play the game.

No Man’s Sky has very clear problems. Its mechanics are insubstantial, with the crafting and inventory management systems being a particular exercise in tedium. Yet its scale and beauty is unmatched by any other game I’ve ever seen. It does things no other game ever has. It’s tempting to call No Man’s Sky “decent, but not great,” but that undersells both the game’s successes and its failures. No Man’s Sky is incredible, awe-inspiring, and profoundly disappointing.

The first time you meet something truly alien. Docking with the Atlas Interface for the first time, unsure what mysteries the galaxy might hold.