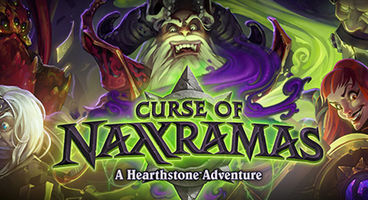 A solo Adventure Mode has been officially announced by Blizzard at PAX East, where the card battling game will support a single player campaign called 'Curse of Naxxramas'. It's a PvE adventure for everyone to play.

We'll battle the lich Kel'Thuzad and his undead host. Iconic bosses will appear in five unique wings of the dungeon. A total of 30 new cards are introduced to Hearthstone.

"The ancient necropolis Naxxramas, a base of operations for the powerful lich Kel’Thuzad and his plague-bearing undead host, comes to Hearthstone in a single player PvE Adventure that anyone can undertake!" blog Blizzard.

"Progress through one of the five unique wings of the dungeon and gain new cards for your Hearthstone collection by defeating the iconic bosses that you’ll face along the way – the oversized arachnid Maexxna, the fungal horror Loatheb and the shambling abomination Patchwerk are just a few of the horrors that await your challenge. Each boss has their own unique cards and Hero Powers at their disposal to challenge even the most seasoned of card-slinging adventurers!"

Blizzard also announce that Curse of Naxxramas will "open its gates to challenge Hearthstone players over the course of 5 weeks, opening wing by wing." The first wing is The Arachnid Quarter and will be free to all Hearthstone players. In-game gold or real money can purchase the additional wings as the weeks pass.

Curse of Naxxramas releases on PC, Mac and iOS at a date yet to be determined. Visit the Battle.net blog for more.