16 April 2014 | By Simon Priest
Eugen Systems will be releasing Wargame: Red Dragon tomorrow which adds naval warships into the mix of ground and airborne units, as they boast it's "even more ambitious than AirLand Battle".

These naval vessels are "not merely extra units" but add a whole new strategic depth and will "unlock fresh tactical opportunities" for those who exploit these new assets.

All the basic mechanics of the series remain but now Eugen is shifting the campaign to Asia with over 650 new units with "meticulously detailed and varied battlefields" to play on.

A new dynamic campaign is introduced with multiplayer modes and up to 20 players can compete simultaneously. Wargame: Red Dragon releases on PC tomorrow, April 17th. 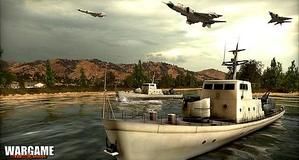