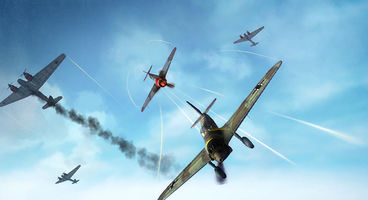 While the World of Warplanes MMO might only be worth 10% of World of Tanks' thunderous 80 million users, Wargaming is nonetheless "very happy" with their winged spin-off.

They "might not call it a big success" when compared to WoT, but across the industry it's a "huge success" to achieve 8 million. Warplanes is also more Western-orientated.

Why would that matter? World of Tanks' biggest chunk of community comes from Eastern Europe, and those areas find tanks much more appealing than warplanes.

"It’s always funny when I hear that question,” said Wargaming’s European general manager Rinaldo Andreolli. “Some voices internally might have thought the same or said the same, but this comes because everybody’s comparing World of Warplanes to World of Tanks.” The question being: has Warplanes been struggling?

World of Tanks goes into battle with 80 million users, while Warplanes is chocks away at just 8 million by comparison.

“That sounds like, ‘Okay, that’s only ten percent of World of Tanks’,” he said. “But if you look at the gaming industry, who would not kill for having 8 million registered users? And we have that. We might not call it a big success, but for any other gaming community, that is a huge success, and we’re very happy about the success of Warplanes.”

"The vehicle of choice in the Eastern European countries and Russia is definitely more on the tanks,” he said. “The planes are more in the Western world and I’m curious to see what it’s going to be with Warships.” Wargaming also has more direct competition with World of Warplanes as War Thunder has, well, stolen some of its thunder perhaps?

World of Tanks has just received its major Update 9 makeover which dramatically overhauls the games engine for more visual flair as the studio packs in a lot more polygons for greater detail.