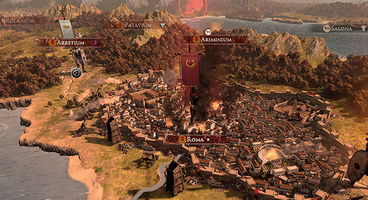 For those who own Creative Assembly's Total War: ROME II you might have noticed it's got a lot more Emperor in its diet. Today marks the launch of the Emperor Edition, which overhauls some key things.

The political system has been reworked with building chains overhauled, and an extensive campaign rebalancing. Armenia joins the playable factions in the Grand Campaign.

We also get the Imperator August campaign - the Roman Civil War, and saw the fall of the Republic and the rise of the Empire. That sounds like it'd make a great movie!

Total War: ROME II automatically upgrades itself to the Emperor Edition through Steam, but Creative would like to remind players that if the update isn't downloading then be sure to opt out of the beta releases, and then restart Steam. Naturally any mods may cause some serious adverse effects right now.

"Alongside all previously released updates and free content it comes with significant improvements to the politics system and civil war mechanic, an overhaul of the building chains, extensive rebalancing of the campaign as well as land and naval battles, an improved UI, tweaked and improved graphics and more," posted Creative.

"Finally the Emperor Edition includes Armenia as a new playable faction in the Grand Campaign as well as in the Imperator August campaign, our largest campaign pack for ROME II to date, which throws you in the chaos of the Roman Civil War that saw the Roman Republic fall and the Roman Empire rise, with Augustus as its sole leader."

Check out the lengthy changelog for Patch 15, which introduces the Emperor Edition.