16 October 2014 | By Admin
Paradox Interactive is celebrating the one year anniversary of its free-to-play spell 'em up Magicka: Wizard Wars today, offering a special Imp skin to each of the game's 1 million registered users.

As well as reaching that 1 million players mark, no small feat in itself, Paradox claims that 25,000 matches of Wizard Wars are now played on an average day. Fans of consumerism will also be excited to note that 300 items are now available in the in-game store (one per day since the game's release, apparently), while 1,400 bugs have been annihilated thanks to player feedback.

Which is all very interesting, but you probably want to know more about how to dress as an Imp. Log in to Wizard Wars between October 15 and October 22, and you can grab the Imp skin from the in-game store for one crown. Those who supported the game by buying a Founder Pack will receive different colour versions of the Imp skin to match their Founder Robes.

is still in open Beta. You can sign up to play for free on the official website. 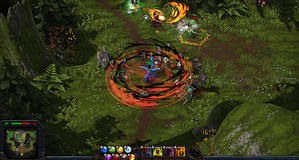