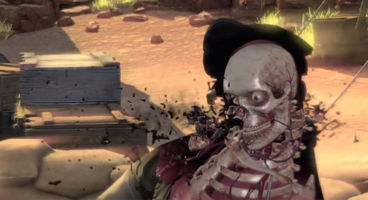 Prepare to cringe as you witness the bone and organ violator that is the X-Ray Killcam from Sniper Elite 3, in this developer diary from Rebellion. The studio has greatly improved the Killcam, with extra bits on display.

It's not for the faint of heart, and you might just start feeling sorry for the poor flesh bag in your reticule. Rebellion aren't shying away from the bone snapping or meat explosions.

There's an argument to be made that the X-Ray Killcam is an excess too far, but the Sniper Elite 3 team are expanding it to even include vehicles. Those poor, poor vehicles.

Rebellion defend the Killcam as a way to 'illustrate why snipers are so feared' in World War II, or any conflict.

Sniper Elite 3 takes place in North Africa and is much more of a sandbox than V2, with great improvements made to enemy AI so that they behave as squads and not some hive-minded super army. Check out our interview with Senior Producer Jean-Baptiste Bolcato as we discussed the newly announced Sniper Elite 3, due in Q2 2014.