Is Sniper Elite 4 in the works?

Oh, Sniper Elite. What would we do without your in-depth exploration of long-distance assassination? How would we make do without your hyper-violent portrayal of ballistics versus human flesh? What reason would we have to go on without knowing there’s another sequel in development?

Think you're a good sniper? Well, you can test out your marksmanship skills in an upcoming singleplayer mode for Sniper Elite 3, the Shooting Range.

The Shooting Range offers four sharpshooter challenges and new achievements for every weapon in the game, from rifles to SMGs and pistols.

Three new pieces of DLC for Sniper Elite 3 have emerged on Steam, including Save Churchill: Confrontation, the final entry in the three-part series.

Also available are a couple of multiplayer goodies - a free map, Night Watch, and the return of Capture the Flag mode.

Enter the Belly of the Beast in Sniper Elite 3 DLC

Rebellion has released the second episode of its Sniper Elite 3 DLC campaign, Save Churchill Part 2: Belly of the Beast. Unlike the last episode, this one is set in an entirely new level.

You're off to the mountains of Morocco, where the Nazis have a hidden facility for creating experimental weapons and interrogating high-profile Allied prisoners. 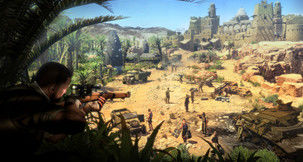 Is Sniper Elite 4 in the works?