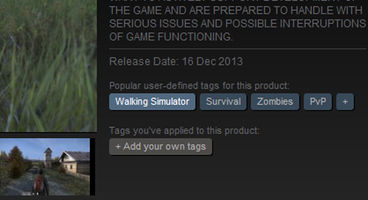 The recent addition of Steam Tags for users to tag games with what they think is relevant, which in turn is to help others find similar games, has now been cracked down on by Valve. Freedom isn't free.

Abuses and jokes were had, and so Valve has introduced restrictions as well as the ability to report certain tags. Also, for a tag to become popular, they need a higher majority.

The class clowns have had a field day with the new labelling system like trying to get Dark Souls tagged as 'casual', or injecting a lot of swears into the systems.

Valve will now be removing certain tags if they prove to be abusive/offensive, inappropriate, a spoiler or simply unhelpful. The entire Steam Tag system is designed to let users themselves help others identify certain games, which then feeds the 'recommended for you' section and search filters.

They won't be removing tags however that could put users off from buying a title, if the tag is thought justified. Instead Valve caution developers to think about how they're communicating their game, and how people are actually seeing it.