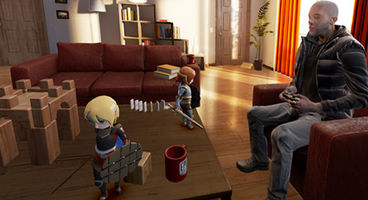 At this week's GDC, Epic Games has unveiled the existence of something they're calling Couch Knight. Essentially it will use "positional tracking and basic avatars" to bring characters to life in a virtual living room.

At this stage it's a tech demo and held at the Oculus Rift booth at GDC, and the player's movement and positions map to the avatars using UE4's inverse kinematic system.

Yeah, it all sounds a little sci-fi but it's real, honest! The avatars could brawl on the virtual coffee table or even take the fight into the laps of avatars.

This comes as Oculus unveil their Development Kit 2 with pre-orders now open at $350. A lot of improvements have been made since those early Kickstarter days. This puts us one step closer to finally having consumer versions available. Epic is developing Couch Knights as an Oculus Rift exclusive.