Dragon Age: Inquisition "isn't the wrap-up of a trilogy," it has 'no coloured endings' 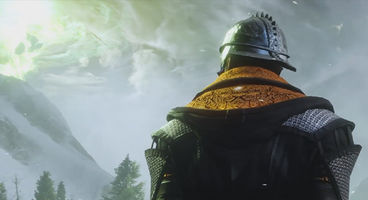 BioWare's executive producer Mark Darrah for Dragon Age: Inquisition has affirmed that this October 7th due RPG "isn't the wrap-up of a trilogy," as they never built it with that in mind unlike Mass Effect.

Every Dragon Age, barring expansions to the original, has had new lead characters. Producer Cameron Lee adds they "don't have colored endings," referring to Mass Effect 3.

There's a big overarching story that BioWare is playing with throughout the Dragon Age games, but there's no central figure we follow like with Commander Shephard.

BioWare consider themselves 'free' to explore as much of Dragon Age's world as they want because they don't have set characters necessarily holding them back. In fact they're positioning Inquisition to be their most ambitious RPG to-date because we're in charge of an entire faction - not some low-to-mid-level commander.

A string of interviews are now available online as BioWare release a new gameplay trailer to announce Inquisition's launch date of October 7th. It releases on PC, Xbox 360, PS3, Xbox One and PS4.

Much of Inquisition is open world adventuring, and Darrah explains that the Inquisition itself acts as the perfect mechanic to guide us back to the core narrative of the RPG. "This is where the inquisition is a great device for us to use," he explained. "When you're in the more open-world parts of the game, you're increasing the renown of the inquisition. You're gathering agents. You're encountering small quests that are more traditional to what we do, but your freedom's really high."

"When you're reaching the point where your inquisition is strong enough to unlock--essentially what you're doing is then the inquisition itself is able to bring you towards the next part of the critical path. The reason why I think this is so powerful is it allows us to have a strong narrative spine in the core of the game. You can explore, you can gather materials and do crafting, and explore the regions and find this lore, but when you're prepared to progress on the critical path, that critical path is there, provided your inquisition is strong enough to progress."

Producer Cameron Lee in a separate interview promised there won't be any 'coloured endings' for Inquisition, like with Mass Effect 3's final moments which came down to Blue, Red and Green to differentiate the epilogue.

"We certainly don't have colored endings," he said. It's part of BioWare 'returning to form' after the disappointment of Mass Effect's end to the trilogy and the many missteps taken with Dragon Age 2. Allegedly Inquisition has '40 endings'.

The official Dragon Age website has been updated with all-new information.