Nobody expected the Inquisition. To be this good

Dragon Age 2 had its moments, but reused assets and a plot that focused entirely on one city left it feeling claustrophobic and worse, a bit cheap. Bioware had some work to do to get the franchise back on track. Thankfully they’ve spent the last few years learning from their mistakes and cooking up something pretty special. Dragon Age: Inquisition is a terrific fantasy tale that makes the troubled world of Thedas feel bigger and more alive than it ever has before.

Nobody expected the Inquisition. To be this good.

You begin Inquisition as a clueless bystander caught up in earth-shattering events way beyond their control, who finds themselves invested with the ability to close portals to the demonic realms of the Fade. These are springing up all over the place and spewing out demons like nightmarish confetti. How you interpret your power is really at the core of the game – I played as a slightly world-weary dwarf warrior, who had little time for the God-bothering rituals of the Chantry (Dragon Age’s major church) and consistently denied that he was in any way touched by the divine. As far as he was concerned, this was just a matter of dealing with a problem before it got out of hand. By contrast I started another game as a religious human zealot, who firmly believed he was the true Herald of Andraste, and was willing to destroy anyone who disbelieved him.

You quickly become a symbol of faith in this troubled world, reviled by some and worshipped by others. These matters of faith and character motivation offer some of Bioware’s most interesting role-playing yet. Though the main plot is familiar fantasy ‘save the world and slay the dragon’ fare, at the core of Inquisition is the manner in which you wage what is essentially a religious war. The concept of religion has been relegated to the background in previous entries, but now it’s at the forefront of everything you do – every interaction you have is coloured by your status as a theological, mythical figure, and it’s how you use, abuse or avoid this power and responsibility that makes for Inquisition’s most memorable moments. Though there are a few binary choice moments that spoil the illusion of choice, most dialogue trees avoid the ‘bastard or saint’ trap Bioware occasional falls in to in favour of more subtle variations.

The writing is smart and the characters well-drawn, from the strong but conflicted warrior Cassandra to the easygoing Iron Bull (who offers a welcome blast of carefree camaraderie) and debonair court mage Vivienne. You’ll have your favourites touring Thedas with you, but it’s just so nice to take a break from saving the world every now and then and head back to base to chat with your team, get drunk with Iron Bull, tease Cassandra about her addiction to Varric’s trashy crime novels. Even the less charismatic members of the tea, like gruff Grey Warden Blackwall and moody elf Solas have their moments. 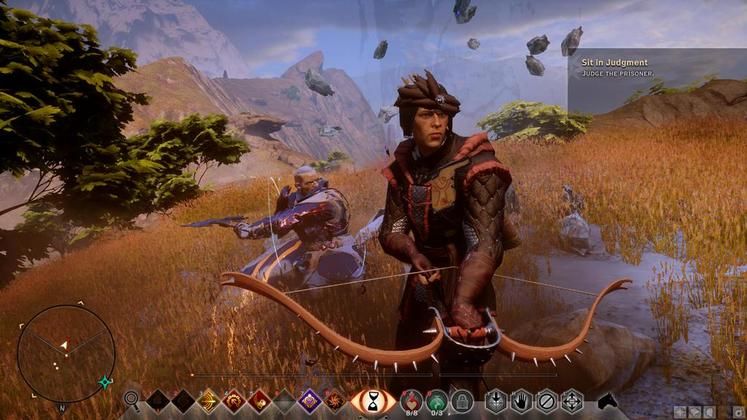 Let me remove that silly hat for you...

Outside of your combat buddies there’s three equally well-developed members of your loyal council, each of which has their own quests, dialogues and motivations. Returning characters Leliana and Cullen represent the intelligence and military sectors of the Inquisition respectively, while spritely newcomer Josephine handles the politics. They may not be at your side in battle, but you’ll come to rely on them just as much as your party.

Each of these agents can be utilised on your campaign map, a tactical view of the bordering powers of Orlais and Ferelden where you’ll plan your excursions and operations. As well as unlocking new regions, the map is packed with side-missions to send your representatives on. These are completed in real-time outside of regular gameplay, and earn your faction new ‘Influence’ points, which unlock new perks, items and other goodies. It’s a smart way to portray the logistics of organising a military and political power, as well as providing the player with another stream of rewards and unlockables. I took to scanning the board for lengthy, five-hour plus missions at the end of a session, booting up the game the next day to discover what I’d uncovered. You can also spend another resource, ‘Power’, on the map to open new zones.

The world of Thedas is mind-bogglingly huge, a frequently spectacular fantasy landscape absolutely covered in quest markers, objectives, collectibles and secrets. In fact the sheer scale is something of an issue early on; the Hinterlands is the first region you unlock, and it’s almost overwhelmingly vast. Inquisition’s story takes a while to kick into gear, and I almost wish that Bioware had put the first act closer – a gorgeous, breathtaking set-piece that showcases the studio’s brand of storytelling at its very best – a little earlier on. 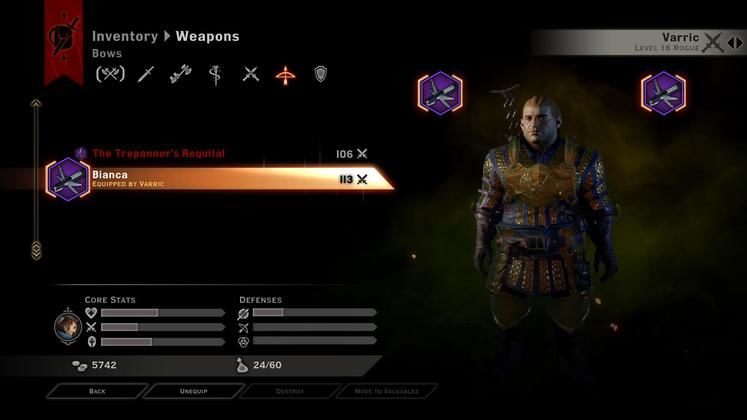 The armour system is very smart, allowing you to choose a design you like and customise every component to your preference, both visually and statistically

The first fifteen hours are mostly spent stumbling around the Hinterlands, and it throws the pacing off. There are a few too many MMO-style resource collection quests for my liking, and without impetus from the overarching plot you feel like you’re going through the motions. My advice is to do the story missions as soon as you can, because they unlock more world details and new mechanics that make exploration far more meaningful. I don’t want to spoil anything, so just trust me!

Combat is probably Inquisition’s weakest suite, a blend of Dragon Age 2 hack and slash and Origins’ more considered tactical action that offers pyrotechnic fun, but never quite feels as smart and deep as the best RPG battle systems. To often I felt like I was going through the motions and simply spamming three or four signature attacks, rather than approaching each fight with a new strategy. The much vaunted tactical camera mode is a nice addition, but despite playing a large chunk of the game on hard difficulty, I never really felt cause to use it. When I did, I was gawping at the pretty fireworks and shiny armour rather than using it to outsmart a foe.

There are a few nice touches. The way the action slows down for a brief moment when you trigger a combination attack – say, crushing an archer that’s been frozen in place with a brutal two-handed swing - is a clever way to provide the player both visual feedback for their actions and a satisfying payoff for smart decisions. The increased importance of potions and grenades is also a neat way to deal with the issue of feeling forced to take a healer mage. Now you can justify a squad of pure warriors and rogues, though wizardly types still pack a number of defensive spells that you’ll probably miss. 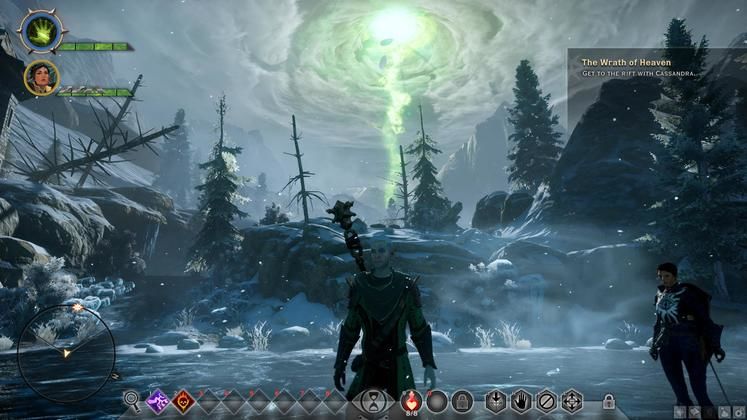 Environments are lush and filled with beautiful detail

Thankfully Inquisition’s combat is perfectly serviceable and enjoyable as a way to get you from point A to point B for the next plot point, unlockable zone or side-mission. Despite the intimidating amount of content in the game, I never had that sinking feeling I often get in Assassin’s Creed that I’m wasting my time. Everything, from clearing out rebel-held castles (a thrilling fantasy version of Far Cry’s outposts) to messing about with ancient elven devices, felt like it was advancing my character’s goals and gaining him extra power, rather than ticking off meaningless numbers. And if I did ever feel bored? Well, Inquisition doesn’t punish you for knocking a particular side-mission on the head or passing on collecting magical shards scattered across the map. If something bores you, you just skip it, and wander across the horizon to find something else to do. No thanks pal, I’m not collecting ram meat - there’s a cave full of corrupted spiders over there needs cleaning out.

A quick mention for the dragon fights; there are ten winged horrors to find across Inquisition’s and each battle is a crunching spectacle of violence that lingers long in the memory. When I took down my first, striking the last blow in a blasted and scorched arena littered with dead minons and party members just as my last potion ran out, it was a real moment to savour. In terms of difficulty and variety, I’d say they actually top even Skyrim’s dragon fights. The fact that you net yourself a hoard of treasures and crafting materials to forge spectacular pieces of armour or new weapons is just the icing on the cake

Inquisition is an excellent return to form after the claustrophobic, rushed Dragon Age 2, an exciting and sprawling colossus of a game that rewards the player at every turn. The first act is a little slow to get going, but once the story has its hooks in you and the true scale of the world opens up before your eyes, it’s easy to forgive early problems with pacing and a slightly lacklustre combat system. It says something that after around forty-five hours of gameplay I was disappointed that the main plot was showing signs of coming to an end, and that as soon as I finished I wanted to start the whole thing over again.

Again, I don’t want to spoil anything, but the close of the first act is a beautifully executed sequence that made me want to jump around the room pumping my fists in the air.