There's a few other interesting things in the game that you'll get to check out here; different weather events will pop up to disrupt the strategy action, while various sub-factions can be recruited to fight in your armies.

You can also get a glimpse at 'Conquest' mode, the overarching campaign where you'll take on other factions and compete for resources. From here you can send out invasion fleets to take control of planets in RTS battles, but you can also spend your time "building invasion fleets, developing your technology tree to unlock new units and skills, spying on the enemy and sabotaging them."

It all looks very colourful, and there's a few interesting systems to buff up the traditional real-time action. The weather system in particular sounds like it could offer some welcome complications in the midst of battle. "Use a sandstorm to approach the enemy base unseen, or mount a rearguard attack by crossing a freezing river. Each of the 7 planets has diverse environments, and varied terrain that will force you to adapt your strategy," says Tindalos.

Etherium is set for release "early next year." Could be just the ticket for strategy fans looking for a classic-style RTS to sink their teeth into. 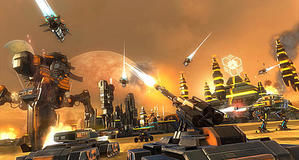