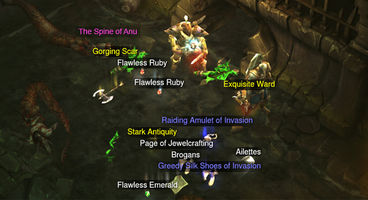 Finally having clawed its way out of closed beta and now the Public Test Realm, Blizzard announce Patch 2.0.1 will be going live for Diablo III today. It's an exciting chapter for the action-RPG of many loots.

The Auction House remains until next month when it’s burnt to the ground. Normal, Nightmare and Hell modes are gone but customisable difficulty takers place mid-campaign.

Master and Torment settings are unlocked at level 60 and 70 respectively. Paragon levels will be shared between characters and never stop levelling. Primary and secondary traits are being introduced to items in Loot 2.0, with random stats being narrowed in scope to avoid despair and 'smart drops' tailor items better to the current character.

"We'd like to thank everyone who has participated in the Reaper of Souls Beta and Patch 2.0.1 PTR. You've done an amazing job of testing, and we greatly appreciate all of the feedback you provided during this critical phase of development," blogged Battle.net.

Patch 2.0.1 will be going live today sometime for Diablo III.