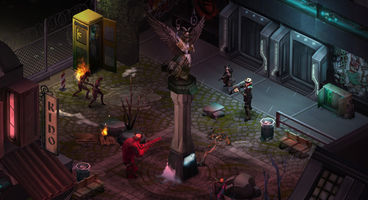 The greatest addition is perhaps the new save/load system so we needn't rely on checkpoints any more. The studio has listened to all feedback when designing Dragonfall.

Shadowrun: Dragonfall releases for PC, Mac and Linux on Steam and GOG.com for $14.99, and to mark this occasion the original is also for a limited time at $14.99.

"The response to Shadowrun Returns was so overwhelming that it inspired us to pull out all the stops in creating Shadowrun: Dragonfall. We really did our best to listen to fans and act on their feedback,” said Jordan Weisman, founder of Harebrained Schemes. “We are thrilled to unveil our next story and can’t wait to see all the awesome new Shadowrun stories that the community will create with the Dragonfall expansion and the Shadowrun Editor.”

Shadowrun: Dragonfall is available on PC, Mac and Linux through Steam and GOG.com.

▪ Experience a New Full-Length Campaign: Return to the “Tech meets Magic” future of Shadowrun in an all-new 12+ hour campaign. Operating out of an offbeat hub neighborhood, you’ll choose which missions to accept and how you’ll approach them while navigating the dark underbelly of “the Flux”.

▪ An Exciting New Locale: Shadowrun: Dragonfall transports runners to the Free City of Berlin, a thrilling Shadowrun setting full of gorgeous new hi-res environments, a diverse new cast of characters, and a new soundtrack by Sam Powell, the composer of the original Sega Genesis Shadowrun game.

▪ Command Your Team: Lead a small team of shadowrunners, each with their own outlook and backstory. The members of your team are designed to play unique roles during missions, and each has a distinct set of skills, abilities, strengths, and weaknesses.

▪ New Weapons, Portraits, Enemies & More: Try your hand at the long-range sniper rifle, explosive grenade launcher, or stun-inducing taser. Chrome yourself out in the latest cyberware, and take on deadly new enemies - including new magical creatures like gargoyles and fire drakes. Dragonfall brings a host of new items, characters, over 60 new portraits to choose from, and many other improvements to the Shadowrun Returns experience.

▪ Save Anywhere: You can save your progress at any time during the game. The new save-game functionality is available in new downloads of Shadowrun Returns and through a patch for all existing copies.

▪ New Game Editor Features: Dragonfall brings a wide range of enhancements to the Shadowrun Returns game editor for community content creators - including a scripting system to better control lighting, tracking mission objectives in the main game UI, placing exploding barrels, and allowing players to input keypad passwords and custom text strings in conversations. In addition, content creators will be able to use all of the new Berlin environment art, items and characters in their own stories along with assets from the original Shadowrun Returns campaign.