Disclaimer: I don’t know if it matters to anyone, but I want to get it out in the open at the start that I am a backer of Shadowrun Returns. I don’t think it compromises my critical ability regarding the game, at least no more than any other game I’ve paid money for, that’s why I’m still going ahead with the review. If anything it makes me more critical as my expectations are higher, but at the same time like any game I’m looking forward to I want it to succeed. I’m not getting any money from Harebrained Schemes or anything so I don’t think it’s of any consequence, but I just wanted everyone to know. Right, now on with the review of Shadowrun Returns, my brand new incontrovertible and inarguable Game of the Year!

Kidding, although it is still a good game even if it’s not absolutely incredibly mind-blowing. Shadowrun Returns is set in the sci-fi/fantasy tabletop world of Shadowrun, a futuristic world ruled by megacorporations, technology and magic. It fuses high fantasy with cyberpunk and it’s as compelling as it sounds. Humans, elves, dwarves, trolls, and orcs are the main races and can all be chosen to be your player character (with various bonuses for each). After that you aim for a speciality, such as Mage, Decker (hacker), Shaman (can summon elemental beings), and Rigger (can control Drones). Shadowrun Returns itself is an isometric RPG with turn-based combat, which I’ll get into more shortly – but first, plot.


It takes place in Seattle about fifty years from now, where bad stuff is going down. A brutal serial killer called the Emerald City Ripper is murdering at will and removing organs from his victims, one of whom is your character’s old friend Sam Watts. As one of the few Shadowrunners Sam trusted he sends you a message via a ‘Dead Man’s Switch’ (an implant that sends a pre-recorded video over the ‘net once its owner is deceased) asking for your help, in return for previously-arranged payment. Since your character doesn’t have a lot on their plate they take the job, but as you can probably guess the investigation becomes a lot more complicated than just catching Sam’s killer.

One of the best things about Shadowrun Returns is the writing. It’s believable, interesting, frequently humorous (the only good thing the game can say about your apartment at the beginning is that “it’s not on fire”) and yet also goes to some really dark places. The writing makes a world that mashes up Blade Runner, Lord of the Rings, The Matrix and Game of Thrones and makes it feel like a real place, and the twists in the story are both crazy (even to the people in the game) and unpredictable but still feel believable and relatable. In game terms the best thing is that conversations are kept funny and relevant yet still brief, and that’s something even the best games trip up on. Only LucasArts adventures like Monkey Island have managed to so successfully make short gameplay-first conversations so entertaining, so extra props to developer Harebrained Schemes for this. That’s good writing, and it kept me engrossed in the world all the way to the end.

Which is a shame, since probably the biggest flaw in Shadowrun Returns is that it never quite makes enough of the world. It’s very linear for a start, which isn’t necessarily a problem but if you’re expecting to explore an open-world Seattle, deciding Deus Ex-like whether to hack a door at the back of a building or talk your way in the front door, forget it. All areas present a straight line (for the most part) to victory, the lovely isometric backgrounds are a bit static, and side-missions are always just a result of finding something on the way and taking it to someone (there is just one single optional proper mission in the game). This isn’t really a criticism as such, but the way only a handful of situations can be solved with more than one outcome and, more importantly, how many characters don’t say anything or how many things can’t be examined are all definitely problems. Your party of Shadowrunners for example is often made up of mute guns-for-hire, and I don’t think that’s more fun than gathering a group of interesting characters. With writing this good and a world this interesting you want as much dialogue and text as possible to engage you in it, and the world can often feel far too empty.

Combat though is an absolute delight, largely thanks to it being almost whole-heartedly influenced by XCOM: Enemy Unknown, specifically Firaxis’ recent reboot of the series. Fortunately Harebrained Schemes have added their own tweaks to the formula to keep things feeling a little different, but on the whole it’s very XCOM. For example movement works identically at the start, with a “near” area you can move to and then still shoot and a “far” area that you can dash to but give up the ability to shoot. There’s still Action Points but only 1-3 (meaning you can sometimes “dash” and yet shoot if you start with 3 AP), and while this offers the main distinction from XCOM the fun value and the simplicity of the combat definitely carries over from Firaxis’ Strategy Informer Best Game of 2012. Missions regularly turn into permanent combat which literally turns Shadowrun Returns into a cyberpunk XCOM, and I don’t think anyone would complain if that was all the game was.


Basically that’s how Shadowrun Returns goes – walking around talking to people in a futuristic fantasy world interspersed with turn-based combat. There is more of course, including upgrades for all the various classes. Shamans, Adepts and Mages can unlock different spells, and there are always better clothes, guns and grenades to check out. There are even Deus Ex-style augmentations to upgrade your body, but you do it at the cost of Essence which will make it tougher to play as a Mage since that’s where your magic comes from. You can mix and match classes too, although remember the jack of all trades is the master of none and it may be fun to be called a Technomage but you won’t get access to the high-level spells. There’s no XP in the game, only “Karma” points, which are only earned by accomplishing objectives. I’m hoping I’ll get to continue my character on to the next campaign when that comes out since I came nowhere near the higher levels for any of the game’s wide array of upgradeable stats.

I personally played as a pistol-specializing Decker, so I was a master of the Matrix. The Matrix is the virtual reality replacement for the internet in the future, and hackers can travel through it as a “virtual essence”, summon ESPs to fight with them, and take on firewall programs defending sensitive areas of cyberspace. It’s Tron basically, with a dash of, well, The Matrix. It’s an interesting area and plays much the same as regular combat (except you can’t die, only get kicked out), but not enough is really made of it. You only enter the Matrix a handful of times in the game, and it’s rarely optional. That’s that bigger problem with the game I mentioned before where a couple of places give you multiple tactical options but they’re often too few and far between, but the Matrix is especially under-utilised. It’s fun though… which is why I wanted it to appear more.

My biggest problem with the game though is saving. I don’t know if Harebrained Schemes had been chatting with their rogue-like fan backers, or the ones who play XCOM in Iron Man Mode and think anyone who doesn’t do so is playing the game wrong, but for some reason Shadowrun Returns doesn’t have any save options. There’s an autosave at the beginning of each “level” (and fortunately there can be several levels during each mission otherwise I’d really be angry) and that’s it. No checkpoints, no saves before hard bits or after conversations, no manual saving at all. On Normal difficulty I must’ve played the areas near the end of the game half a dozen times and only won by remembering where enemies came from and preparing – is that really what some gamers want to do? I personally want to just replay the hard section I died on, I don’t want to replay every fiddly little battle until I’m sick of it because fate dealt me a bad hand at the end. Give people the option, sure, but don’t force this on them just to artificially inflate the difficulty.


The campaign’s a decent length, roughly 15 hours depending on how well you do. The absolute best thing about Shadowrun Returns though is that it’s like Neverwinter Nights - there’s a fun campaign but the real aim of the game is to encourage modding and user creations. Right out of the box there’s a level editor with full access to every part of the game, and right under “new game” there’s the option to choose a downloaded user campaign to start instead. The game’s even on the damn Steam Workshop, and there’s already cool stuff on there (modders have had access to the editor since the beta) including a remake of the original SNES Shadowrun game. Harebrained Schemes themselves are already hard at work on the next campaign set in Berlin and are vigorously supporting the mod community, so there’s potential here for a lot of content turning up that could easily outdo the already-fun ‘Dead Man’s Switch’ main story. That £14.99/$19.99 might well prove to be excellent value for money.

While there are a few flaws in Shadowrun Returns, most notably linearity, the lack of a save function and a slightly under-utilized world, the excellent and consistently fun writing and XCOM-inspired combat make it a worthwhile experience. Even better as fun as it is the 15-odd-hour long campaign is not the end of Shadowrun Returns since the robust modding tools and encouragement from Harebrained Schemes near guarantee a steady flow of user content. It’s not the greatest RPG ever but it is a damn fun one in an engrossing world, and if you hadn’t backed Shadowrun Returns already it’s well worth a punt – and if you’re still not sure, wait a few months and see if the game’s Steam Workshop page has filled up with user-made goodies. Honestly though, if you just want to consider it a cyberpunk XCOM: Enemy Unknown with RPG elements that’s fine too.

While there are a few flaws in Shadowrun Returns, most notably linearity, the lack of a save function and a slightly under-utilized world, the excellent and consistently fun writing and XCOM-inspired combat make it a worthwhile experience. Even better as fun as it is the 15-odd-hour long campaign is not the end of Shadowrun Returns since the robust modding tools and encouragement from Harebrained Schemes near guarantee a steady flow of user content. It’s not the greatest RPG ever but it is a damn fun one in an engrossing world, and if you hadn’t backed Shadowrun Returns already it’s well worth a punt – and if you’re still not sure, wait a few months and see if the game’s Steam Workshop page has filled up with user-made goodies. Honestly though, if you just want to consider it a cyberpunk XCOM: Enemy Unknown with RPG elements that’s fine too.

Jacking in to the Matrix for the first time. Or summoning a demon from a pile of corpses. 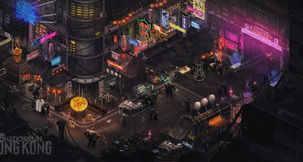 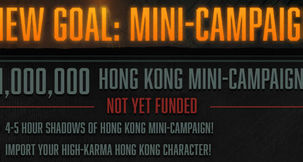 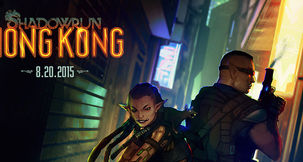