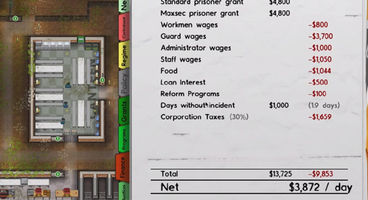 The latest alpha build for Prison Architect focuses on finances which has been the "biggest broken area of the game," admits the Introversion team. No more waiting until midnight and then blowing all our cash by 3 am.

A new 'export' room now handles all our tradeable goods for sale, which sells them straight away, and they tease it's "rife for future escape attempts." Prisons can now enjoy 'continuous income'.

Grants have also been expanded with more money available provided you can meet the higher amount of conditions.

The game's finances have been a mess with cheating considered a defacto approach to building a prison, at least until its self-sustaining. Midnight had been when all federal funding and the proceeds from tradeable goods came in, but that meant changes happened largely in the dark and profit was quickly burnt through in one go.

Grants are your primary income stream during the "early phase of the game," and they aren't just about putting in a new facility. The new Inmate Nutrition Research grant for example will reward $15,000 if you feed prisoners poor and then good food for two days each, making it more of a challenge than a tutorial style mission.

There's even a Government Bailout grant for emergencies when you’re haemorrhaging cash flow, but it's only useable once. Bank loans are now also possible with the initial amount rather small, but more can be loaned as prisons also have a credit rating. Finances now worked hourly as opposed to daily in Prison Architect.

We now also pay tax on profit which encourages us to spend our hard laboured revenue stream, but the prison's accountant has a few loophole tricks up their sleeve dropping the default tax rate of 30% down to 15%, but you could always invest in an 'offshore tax haven' plummeting tax to just 1% - just like real corporations do. You can also sell shares.

Check out the Prison Architect Alpha 19 for a detailed breakdown of the new features. Full Alpha 19 changelog here.