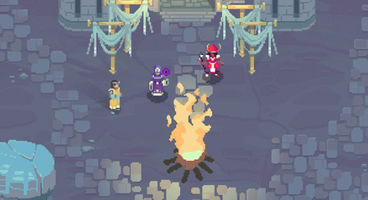 Kitfox Games has taken their action-RPG for 1-4 players to Kickstarter having gotten enough community votes through Square Enix Collective, the publisher's crowdfunding arm.

Our goal in Moon Hunters is to become a "living legend" as we journey to find the missing moon. Our mythology grows as we travel the land and perform heroic deeds for our tribe.

You can play Moon Hunters solo if you'd rather forge a legend on your own, and if we prove worthy enough our legend becomes a constellation in the night sky.

Kitfox says it could be described as 'Legend of Zelda meets Castle Crashers', or maybe 'King of Dragon Pass meets Gauntlet'. Whatever title marriage you have in mind, Moon Hunters will be coming to Steam for PC and Mac sometime during summer 2015. The Kickstarter campaign has just begun with 29 days left.

The studio is asking for $45k CAD - that's Canadian fun money, or 'dollars' if you prefer. So far they've got just over $19k pledged from around 730 backers.

"Along your journey, your decisions show your personality and create your reputation. Donating blood to a dying stranger shows you are Selfless. Flirting shamelessly with everyone demonstrates you are Flirtatious. And so on -- we will support over 50 different personality traits in the final game, each of which has its own effect on the world around you."

"In the real world, as in Moon Hunters, legends are rarely about merely defeating villains. More often, folktales are the story of the Clever hero that tricked the gods into giving humans fire. Of the Loyal hero that ventured into the underworld to save a loved one's soul. Of the Brave hero that declined a god's advances, and suffered for impertinence."

The action-RPG is presented in a 2D sprite art style. There's plenty of it teased on the official Kickstarter campaign.