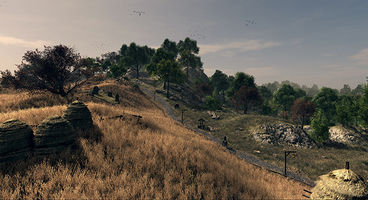 A new indie game project is underway called Northern Shadow, which combines a first-person fantasy RPG with a city/kingdom builder. It's as if Bethesda's Skyrim had an unholy offspring with Banished.

While we're away our steward takes care of the kingdom we've built, which is inhabited by our people who live at the whims of our actions in the world. It's on Steam Greenlight.

An Early Access version of the ambitious game is due out this summer. We rely more on skill than just character sheet statistics, reveals the game's description.

"Northern Shadow is a first person perspective RPG where you can build and manage your own kingdom. It has both sandbox elements, and a classical RPG story," blurbs the Northern Shadow Greenlight. "Game starts after the great defeat of the Northern Kingdom, at the hands of an unknown enemy. Some of the survivors have traveled to distant lands in hopes of rebuilding the now fallen kingdom."

Check out the Northern Shadow trailer below and visit the Greenlight page for more.

▪ Your kingdom, your people - Build and improve your own city. Communicate with other kingdoms, negotiate trade agreements and build alliances. Defend your city and your lands.

▪ Classic RPG systems - In combat, depend on your own skills, rather than statistics on your character sheet. Use spells or weapons, you can play the game your way. Craft weapons for your use, or for your troops.

▪ Living World - Living economy allows you to see the ripples of your own actions all around the world. Your steward will take care of your city while you are gone.

▪ Explore - Discover worlds both above, and beneath the earth. Find precious mineral veins and other treasures.

▪ Gameplay - You can only control your own character. Build your city by talking to your steward workers and selecting an appropriate lot from a miniature map. Protect your surrounding lands by ordering patrols and giving special missions to your troops. Troop effectiveness is determined by their training and weapons/armor quality.

Your cities can produce different wares, which you can trade with other kingdoms if you wish, but you have to protect your roads and provide safe environment for traders first. Wage war or form alliances with other computer controlled kingdoms as you see fit.