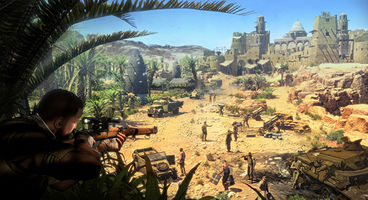 Rebellion's Sniper Elite 3 is now available for pre-purchase through Steam with 20% off its launch price, and includes the 'Target Hitler' DLC. The studio also mentions a "significant announcement" is due next week.

It's "not about" Sniper Elite 3 they say, which is due June 27th, but next week's news will be a "huge step" toward making Sniper Elite's core gameplay even more famous.

The teaser artwork does contain the series iconic eagle motif, but it's not actually related to the third in the series which takes us to North Africa in huge open environments.

"We couldn’t be more excited about Sniper Elite 3’s launch on June 27th. Naturally, being on five platforms – including the new consoles – means it’s had more attention than anything we’ve made before. We’ve been taken aback with the interest and reception so far," said Rebellion CEO and Creative Director Jason Kingsley.

“But there’s always more work to be done getting the Sniper Elite name in the hearts and minds of gamers who are new to the IP, or aren’t aware of the stealth and emergent gameplay that surrounds the core sniping mechanics.”

“Next week’s news will be a huge step towards this goal.”

More Sniper Elite is good and all but what many of us would really like, as we skulk down in our lairs, is some more Evil Genius - and none of that social nonsense either. Sniper Elite 3 releases on PC, Xbox 360, PS3, Xbox One and PS4 June 27th. It's now available to pre-purchase on Steam.