07 April 2015 | By SimonPriest
A real-time space strategy that fully embraces 3D? Shallow Space: Insurgency would like to add its name to this tragically niche market, and now has an Indiegogo campaign, with a "few twists of originality" from its creators.

We'll command a "wide variety of heavily customizable ships" through a deep story campaign, skirmish, co-op and multiplayer. It's been in development for over a year, with a playable tech demo ready.

Flotillas of ships will be under our control in our designated sector of space, as we won't be just managing a bunch of starships or piloting a single ship, but instead commanding a significant number of forces. 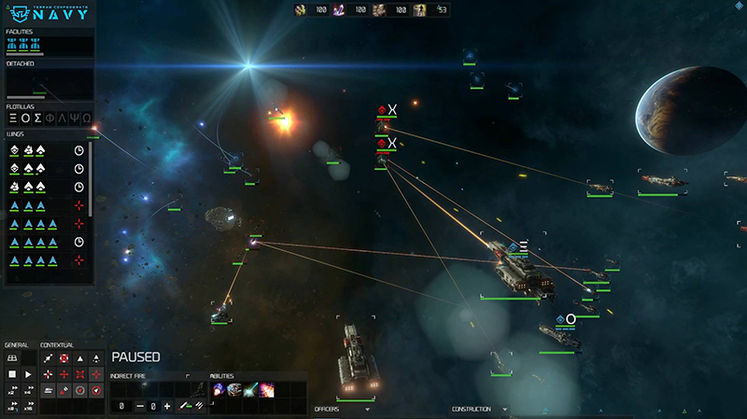 "Players will have access to a variety of tools to aid them in managing large scale war. Ships will be organized into “flotillas” and “wings,” enabling easier fleet management in the intensity of combat. Furthermore, ships will be have some level of autonomy to them, they are piloted by an entire crew after all. These ship organizations and intelligence allows players to focus on the big picture strategy," described the crowd-funding campaign.

"The UI will have a variety of helpful tools, information, and automation to help manage your ships in this potentially difficult environment. Players will even be able to pause, slow down, and speed up gameplay, all while being able to issue orders. Overwhelmed by too much combat? Pause the game, assess the situation, issue commands, and then resume the game."

Customisation is a major feature of Shallow Space: Insurgency, and so we get plenty to choose from when it comes to outfitting our ships and their compositions. "Need to raid the enemy supply lines? A flotilla of fast attack cruisers will get the job done. Assaulting the enemy stronghold? Better break out the battleships and capital ships!"

Check out the Shallow Space: Insurgency Indiegogo campaign to learn a lot more. It has been Greenlit on Steam and there's a playable tech demo to try out. The development team is asking for $85k to successfully fund their project, and have 28 days left with about $5,500 raised so far.