Not to worry though as Snapshot will compensate for every item removed with 100 gold, which is great as that's what's needed to trade for new items. Going forward the studio is looking to further refine the AI and co-op system, as well as add more special locations to discover and interact with. They'd like territory, diplomacy and marauders featured in realms too.

"Finally, it’s here. You can now play single player realm quests, and there is also a co-op battle option where you can invite a human ally to help you with any realm battle. There are also four fantastic new environment types," read the latest update.

Chaos Reborn is available through Steam Early Access and is 25% off until July 13th.

▪ New battle environments implemented for Mana Fluxes, Mountains, Forests, Plains and Palaces. Some of the multiplayer maps are converted to new environment types.

▪ Procedural battle map generation for realm battles (this may be introduced to multiplayer games at some point).

▪ Realm high score tables for realms you have completed. See how you did compared to other players.

▪ Multiplayer league tables are accessible for current and previous season, equipped and classic.

▪ The matchmaker now allows you to set multiple preferences for game mode and competition type.

▪ The equipment no longer has a levelling system - all equipment starts at maximum level. Equipment can be traded in for gold, not XP (there is some work needed to tidy up the equipment interfaces still).

▪ The Fountain of Life no longer resurrects wizards.

▪ Wizard is no longer engaged when hiding in a magic tree.

▪ Shadow trees can now be subverted.

▪ Buffs are now applied to web and bulldoze attack values.

▪ Wizard level no longer affects the mana value of wizards in battle.

▪ Manticore movement range is reduced from 4 to 3 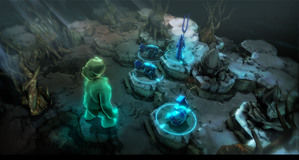