An open-world train RTS, a rogue-like building sim and a noir survival rogue-like are on their way to E3 2015 next week courtesy of Daedalic Entertainment. It's quite an interesting little mix.

Corbie Games' open-world Bounty Train is the train-based strategy teased as blending the American Frontier, the Wild West, FTL and Pirates! set during the American Civil War. That's quite a tall order, especially when we can 'save Abraham Lincoln'.

Valhalla Hills from Funatics is about managing our own Viking civilization in a building sim rogue-like environment. We're stranded on one of an "infinite selection of islands," and so it's up to us to build homes, gather food, craft goods and then enter Valhalla.

Skyhill is a "noir survival rogue-like" from Mandragora Team. As a hotel guest spending a night in the penthouse suite our lovely time is spoilt by a sudden infestation of mutants roaming the halls. Naturally the only recourse is to explore the hotel and build up defences to our room, or do we try and escape to the outside world? Is it safer outside?

These three titles will be hands-on at Daedalic's E3 2105 booth next week. 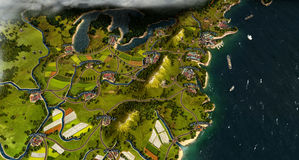