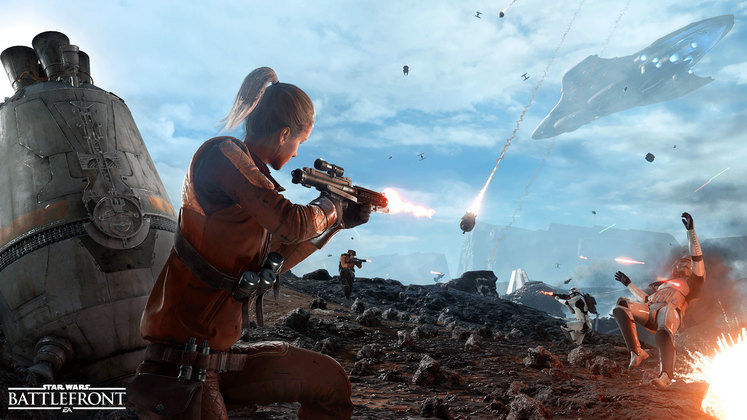 Now the developer has lifted the lid on just what players can expect from the new mode. It might not entirely surprise you to learn that it's all about capturing falling drop pods.

"When you locate a drop pod’s landing site, make your way to it and trigger the short claim process," explains EA. "Your team will win if it captures five pods, or control the majority of them after the 10-minute match is up. If a pod is constantly changing possession with no team able to defend it long enough to claim it, another pod will be sent down to break the stalemate. Then, there would be two pods that the teams have to gain control over."

The mode's designed for eight-versus-eight battles, and as such is one of the smaller-scale game modes available in Battlefront. EA says it's "all about action and quick thinking," and warns that camping on capture zones will probably just lead to a swift death from incoming explosive rounds. The focus on movement and fast-paced action is part of a larger trend that runs throughout the game.

“This goes hand in hand with our design philosophy behind many of the game modes in Star Wars Battlefront,” lead level designer Dennis Brännvall explains. “We’re promoting the idea of a fast, action-packed game where you need to be mobile and think on your feet. Camping doesn't really pay off.”

Drop Zone will be playable on the Tatooine, Hoth, Sullust, and Endor maps when Star Wars: Battlefront launches this November 17. It will also feature in next month's Beta.