14 January 2015 | By Nick Horth
The Arrow Pack is available today for LEGO Batman 3: Beyond Gotham, inspired by the popular TV series starring Stephen Amell as the masked vigilante Green Arrow.

As well as the moody Robin Hood wannabe, you'll be able to take control of equally grumpy super-soldier Slade Wilson, as well as Black Canary, Malcolm Merlyn. And several other of the Arrow's friends and enemies.

Interestingly for fans of the show, the bonus mission included with the DLC appears to take place on the mysterious island that Oliver Queen was stranded on for five years before he became the Arrow. “To survive, I must become something else, something green and pointy,” narrates Amell in the trailer, neatly skewering the frequently grim and serious tone of the TV show.

If you don't want to fork out £2.55 for the Arrow Pack, which is incidentally also included in the LEGO Batman 3 Season Pass, you can still nab some extra gameplay today. The free Rainbow Character Pack has also been released.

“In the new pack, Batman uses his usual array of Bat-Gadgets and a laser-deflecting Rainbow suit to square off against Rainbow Raider, an artist turned evil who proves to be his most colourful challenge yet,” developer Travellers Tales explains. 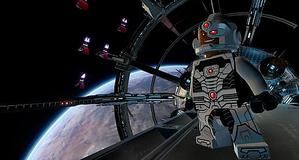