And crikey, it's a lovely looking thing. You play a wild fox with mystical powers that allows him to manipulate the four seasons in order to solve puzzles, summoning winter to freeze a path across a river, or spring to make flowers bloom into position for you to leap off.

Check out those beautiful 2D backdrops. Lovely. The jaunty soundtrack you can hear in the trailer is supplied by a live string quartet. Swing Swing had the idea for the game as far back as 2010, but lacked the funding to bring it to life. After releasing Blocks That Matter and Tetrobot and Co, they joined up with Focus after demoing a new version of Seasons at last year's Gamescom. Here's how the developers explain their game;

"As a wild fox, you will travel across the countryside, through lush forests and quiet rivers, taking advantage of the changing seasons. Of course, this wild fox can run, jump and yap, but the real difference is that it will obtain the power to change seasons, anywhere, anytime. How and why? Well, that’s exactly what you’ll discover by playing."

Seasons After Fall is set for release on Windows, Mac and Linux via digital download later this year. 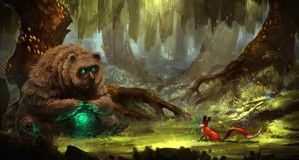