21 April 2015 | By SimonPriest
A royal family has been forced into exile and they plan on taking their lands back, which just happen to be part of a floating Kingdom run by mysterious overlords with a mechanical army. That old chestnut.

Highlands is a turn-based strategy in a beautifully hand-drawn style where we control the royal heirs who must retake city districts to raise, train and supply their growing army. Launch week is 15% off on Steam.

“We’re thrilled to see the launch of our first original IP and are excited to share our game with the community,” said Jonathan Ortega, co-founder and game designer for Burrito Studio. “Highlands offers a unique turn-based strategic experience where player choices will determine whether they return to exile or march victoriously to crush their enemies.”

Food, weapons and recruitment will be on the turn-based agenda, but we'll also get other resources to manage as we progress. Combat itself is a 'simple card-game' as we fight to redraw the frontlines. Highlands has released on PC today through Steam.

● Turned-based tactics with battles and resource management focused on strategic decisions. Drive the enemies out from your homeland!

● Easy to learn and fast-paced while providing deep strategy and plenty of challenges. 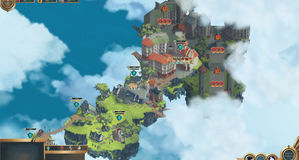