22 April 2015 | By Nick Horth
Ronin is a 2D action game with a hint of Gunpoint about it, though it swaps firearms for the more straightforward 'sword inserted through opponent's head' technique. Tomasz Wacławek's game is out next month, but if you're looking to try before you buy there's a three-level demo available >on Steam.

At its core, Ronin is a game about infiltrating enemy bases to assassinate high-profile targets. As a katana-wielding ninja, speed, stealth and subterfuge are your best weapons; you can cling to walls above unsuspecting guards, hack terminals to switch off light and laser fences, or trick opponents with a holographic tool, run up behind them and cut their gizzards out.

Combat itself play out in the same stop-start manner of an anime sword-fight, with your character flipping back and forth out of the way of enemy troops' laser sights, then dealing the killing strike with her blade. Fighting isn't exactly encouraged, but the game focuses less on the 'one hit and you're dead' approach that Gunpoint took.

All in all, it's looking like a very tidy and enjoyable stealth action game. Ronin releases on May 20 on Steam. Publisher Devolver Digital continues to scoop up some really cracking indie games. 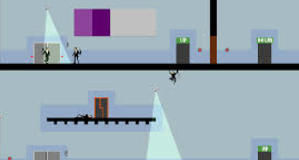