26 February 2015 | By Nick Horth
Zero Sum Games announced today that StarDrive 2, sequel to the 2013 space 4X, is now feature complete, and is off for a round of QA and bug fixing before its April 9 release.

The developers and publisher Iceberg Interactive will be taking StarDrive 2 to GDC this March, so we'll be able to get an extended look at the game very soon

StarDrive 2 offers space exploration, diplomacy and combat in the style of Master of Orion. You can design your own fleet of custom spaceships, then take on rival empires and factions in real-time space battles and trun-based land skirmishes. The big change this time around is that the game's gone turn-based at the strategic level, whereas before it had a real-time with pause system in the style of Crusader Kings 2.

StarDrive 2 will be available for $29.99 when it launches on Steam. Check out developer Daniel DiCicco's video above to see some of what's in store for the sequel. 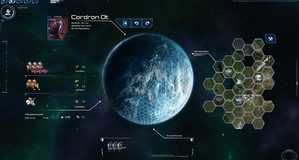