26 May 2015 | By Nick Horth
Arrowhead Studios, the team best known for cult wizard-em-up Magicka, released a modern reboot of classic dungeon-crawling hack and slash Gauntlet last year - unfortunately, it never quite reached the heights of the studio's previous game.

Never say never, though. The team's been hard at work on the game, fixing what didn't work and adding some new features. That means a big old content update is on the way.

"In truth, we were never fully satisfied with how Gauntlet turned out,” admits developer Emil Englund on the Arrowhead blog. “So, rather than just fixing little things here and there, we have been working on the core of the game to turn it into what we originally envisioned. This will mean a free major content update for the game, including improvements to the Campaign and the Colosseum as well as a brand new game mode."

As for what the new game mode will consist of, well Arrowhead's being pretty vague about that. The team does mention that it's taken over management of the Gauntlet online communities from publisher WB, and encourages fans to get in touch with idea, requests and constructive criticism.

It's slightly surprising to see a developer come back to such a lukewarmly received game, but fair play to Arrowhead. Too often studios cut and run entirely. Let's just hope the team can make Gauntlet a bit more fun. 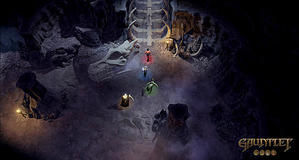