28 April 2015 | By SimonPriest
Twin-stick shooter Hatred from developer Destructive Creations will be beginning its "genocide crusade" at the start of June. It's powered by Unreal Engine 4 and is exclusive so far to PC.

It's unlikely to spread to any other platform any time soon given the 'mass-killing sociopath' we play as, known as the Antagonist. Its subject matter and overall level of carnage will keep it stuck with an AO rating.

The Polish studio has taken a lot of heat since announcing Hatred, and it's been called 'controversial' across the board. It was even removed from Steam Greenlight for a time, before Gabe Newell himself apologised for the 'censorship' of the project and had it reinstated.

Whether you think it's controversial or not, Hatred will be releasing June 1st. Apparently they had planned to launch it May 19th but "honestly speaking we will be playing The Witcher 3 then." 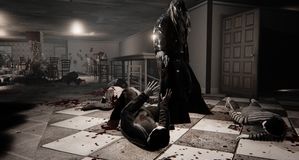