New trailer for Cities: Skylines expansion After Dark shows off the night-time sprawl 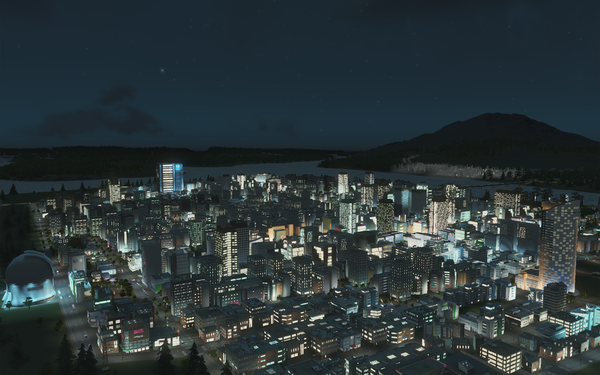 Paradox Interactive and developer Colossal Order have just released a new trailer for Cities: Skylines' first expansion, After Dark. It shows off the new day/night cycle, some new buildings that urban planners can plop down to keep their population happy, and new transport options including taxis and coaches.

Skylines' urban sprawls look fairly lovely already, but an extra sprinkling of neon lights at night-time goes a long way towards making them feel even more alive. New attractions and changes in civilian behaviour that only occur at night should offer some interesting new challenges.

"In After Dark, players of Cities: Skylines will get a chance to see what their city residents get up to once the sun goes down," says Paradox. "Towns will look – and behave – differently at night, and citizens will seek out new evening hotspots such as nightclubs, bars, and more. New city services will make sure that nighttime revelers get home safe in new in-game taxis, while those who get too irresponsible may find themselves in new in-game prisons."

Colossal Order is also taking the game to PAX Prime over the weekend, and you can check out its panel, entitled 'Modding 101: A Crash Course for Cities: Skylines', tonight at 7:00PM PDT by heading over to the PAX Twitch channel.