It's been a few months since Psyonix brought the horrors of micro-transactions to Rocket League. In the sense we're going to be talking about today, that is. They've been around in some form since the early days of the game's release - but it once only applied to picking up a few different post-release DLC automobiles to fling around the small amount of maps the game once had.

But with more and more content spewing into the game month after month, Psyonix has decided to go full-force into the micro-transaction cosmetic market games like Gears of War 4, Counter Strike: Global Offensive and Overwatch have employed to general success.

While many would disagree with the decision to offer additional content at a price, it isn't completely unwarranted with Rocket League. The game has released on multiple platforms at a more than satisfactory £15 price-tag often dipping to single digit amounts during sales. With such a low cost for a very popular game, you can imagine the temptation Psyonix would have to entice its install-base of millions to part with a few extra bucks for the chance to grab some cool new car decals or exhaust trails.

People do it with real cars all the time - they're not entitled to lifetime of 'Pimp My Ride' style tweaks for free just because they bought a car that likely came from the front of a scrapheap lineup. Someone over at Psyonix is creating, testing and releasing the work needed to bring these extra aesthetics to the game - and they shouldn't be expected to keep providing this service for free over the course of the game's, very likely lengthy, life cycle. 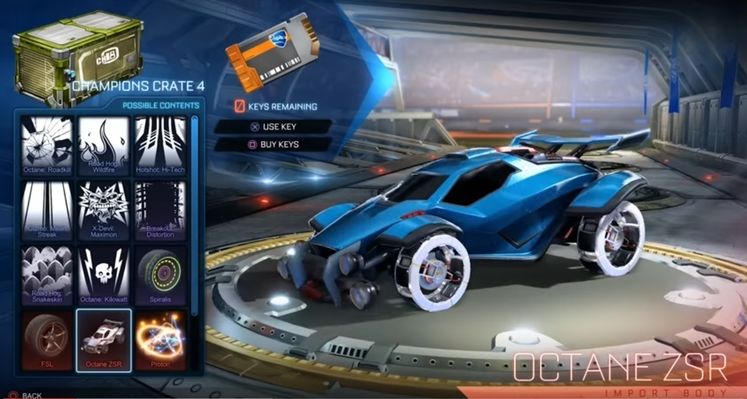 So, with the introduction of Champion Crates and trading in September, Rocket League players went from simply collecting the odd decal, antenna, wheels, trails or odd little car hats between matches to having the off-chance of picking up a Champion Crate. A mystery box that would remain locked until being offered a key. A player could happily ignore the box if making their car stand out wasn't their jam, but for others, they'd peek at its potential contents and judge for themselves whether to take the risk of parting with their cash for a chance to collect a specific reward from the luck-based spinning wheel within.

Like them or not, they're there. They'll always be there. The introduction of these 'loot crates' didn't spur the same negative reaction as Payday 2's attempted introduction - so they're here to stay. And with an alarming amount of YouTubers seeing success in the opening of these crates on camera much like CS:GO variants, it's sometimes hard to dodge the allure of cracking one open when loud, bombastic gaming personalities are treating the deed like a high-roll roulette wheel in a Vegas casino.

So how do we get our hands on some of these crates for ourselves? By simply playing the game, of course. What better way to entice the unsuspecting Rocket League newbie to join the ranks of the Champion Crate Club than simply seeing the end of a match. Win or lose, your chances remain relatively the same. You'll either pick up a standard-issue common item to add to your inventory or be presented with a box from anywhere between September's original Champion Crate to December's Champion Crate 4.

The problem? With such a simple method in place to grab the box Psyonix uses to bait you into buying a key means there's a heightened risk of some greedy players finding ways to 'beat the system' in a way that rapidly degrades the overall Rocket League experience of driving around frantically as a team in an attempt to control a ball far bigger than your own ridiculous flying vehicle.

And with this month's introduction of the fourth Champion Crate, we're practically repeating history when it comes to players looking to 'farm' these boxes without really playing the game.

So how are they doing it? Use your imagination. You'll likely reach the conclusion sooner than you'll find a crate yourself. If they're delivered by simply finishing a round, you can bet a select few individuals will find a way to gain them by doing the least amount of work possible. The classic 'rubber band' trick.

Though it needn't be followed precisely to the name on a PC, the general idea stays the same. Controller users would find some way to keep themselves moving throughout a match while they go off and do other things - presumably watching videos of others opening the crates and gaining the wheels they'll likely never pull. By finding any make-shift solution to keep their accelerate button pushed, they'd queue for a match, drive around aimlessly until it finishes, collect any potential loot (hoping for a box, of course) and be automatically queued for the next round. A classic rinse-and-repeat dead-weight.

So why does this simple 'solution' work so effortlessly? Because Rocket League employs only a single way to cull time wasters - auto-removal of a player once they're considered 'Away from keyboard',with the criteria for this being simply not moving for a specific amount of time. So, by keeping their car moving at all times, the system will never clock potential 'Crate Farmers' as being 'Away from keyboard' in every other respect; thus nullifying their chance of being removed from a game. There's no 'Vote to kick' in place just yet, but you can bet the playerbase isn't all too pleased with the current trend of landing in a match only to have a crate farmer on their team cost them another match.

Reporting works - to a degree. You can't do it in the middle of a match, but there's plenty of instances where the opposing team will suggest you rat out the obvious crate farming fiend while they secure that all-important win for themselves. They'll help however they can, of course, but they're not going to pass up an easy victory. It sucks to be on the losing side without much of a chance to fight it off, but you'd happily do the same in their position. You know it. At best, they'll get a ban that extends with each repeated offence. You can't keep the farmer from ruining another game at some point down the line, but you can hopefully scare them enough with a nice swing of the banhammer straight to their un-skinned minivan.

The conclusion here? Farming is certainly possible. Why its needed is a mystery. You'd expect that if someone's willing to lap up keys at a price, they're more than likely open to the idea of shelling out real cash for the catalyst too if it means saving a few hours of their day when it comes to hoping that one drops.

With the release of each month's new Champion Crate, the rate at which these 'rubber banding' crate farmers are encountered - and subsequently conga-lined on video - flares up once again. There's a handful of ways to combat the trend, but Psyonix seem more interested in pumping out more boxes before tackling the issue of how to actually gain them. They're practically inviting players to taint the experience of those unwilling to take part themselves.

Will they fix it? Maybe. Should you join them? Absolutely not. Play and enjoy the game as you normally would and you'll gain those crates just as fast as someone who's ruining the game for others while not enjoying the art of slamming a ball into a net from the underside of a leaf-expelling batmobile. Crack it open, if you wish, and trade anything you don't want for something you do from another player who'll happily help you out.

It's fine to say you'll play the game however you like once you've payed for it, but when that idea essentially means not playing it and wasting the time of those who do want to play what they've paid for; you're doing the wrong thing. Farm the way it was intended; but don't think of it as farming. You're just playing what enjoy - that's ultimately why you're after whatever is inside that box anyway, right?