It doesn't even feel like a week ago that we spoke of Quake Champions in more capacity than we have since its reveal at E3 last year - but there's already more to share. Welcome to the arena!

With Beta sign-ups now live and players expected to funnel into the revival in just a few weeks time, it's time to familiarise ourselves with the new maps expected to become part of your everyday eSport participation.

'Burial Chamber' is the first such map to be showcased in its own video - and it's certainly a full-scale, dark approach to the historically violent shooter. For the most part, those taking the the run n' gun approach of traditional Quake gameplay wouldn't really be a viable candidate for a traditional burial given their tendency to explode into a bloody pulp; but it's likely the more convenient option if you're already duking it out down there anyway.

Quake Champions Beta Date - Everything You Need To Know

Making the most of its various weapon-types, the Burial Chamber offers up a plethora of threats in its own way to coincide with the gun totting enemies charging through its winding tunnels. Those comfortable enough with the leap will find a creating sniping spot while those who prefer a more mobile approach will find the tunnels of the Molten Underground the perfect place to bring out the ricocheting slug of a shotgun or the spreading blasts of a traditional RPG - if they're not afraid of the lava underfoot.

It's worth checking out the video down below and taking its various locations into mind. While we'll all be on near-equal footing once the game his a public testing phase in the near future, those with some visual memory will have already mapped out its key strategic strongholds. 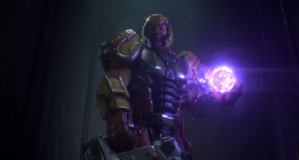