09 March 2018 | By Jamie Davey
Farming Simulator 19 is currently in development for the PlayStation 4, Xbox One and PC, with a release date set for late 2018.

Focus Home Interactive and GIANTS Software have sent over the first in-game screenshot for Farming Simulator 19, but they've also told us that a huge announcement will be made at E3 2018 that will "delight fans".

We don't have any idea what they could be at the moment, but we'll be looking forward to this years E3 in June to find out. Farming Simulator 19 will feature a complete overhaul of its graphics engine this year, and will feature new modes too, so that's probably something we'll hear about at E3. Battle Royale Combine harvesting?

Farming Simulator 19 will be released this year for PC, Xbox One and PlayStation 4. 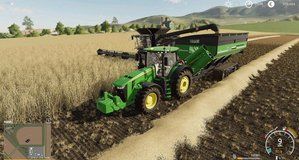