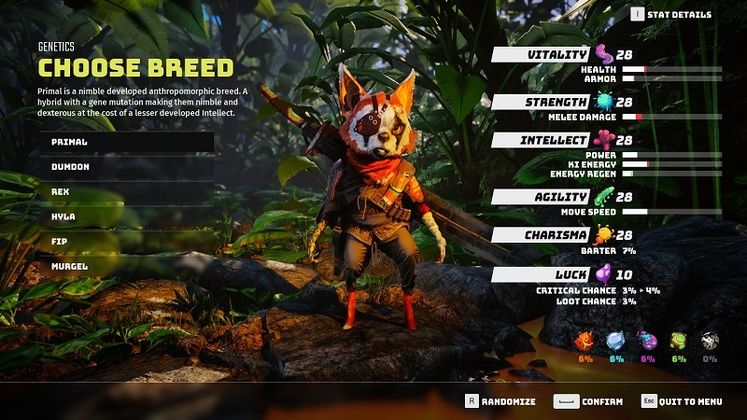 Biomutant's character creation process might look a bit intimidating at first. Although it's not the most complex one out there, you'll still face a series of cosmetic choices as well as different breeds and classes that you can mix and match.

Your breed and class picks in Biomutant determine what your character initially excels at alongside other aspects, like your overall appearance. To help you avoid spending hours in front of the character selection screen, this guide breaks down how it works and gives you a few tips about what to pick. 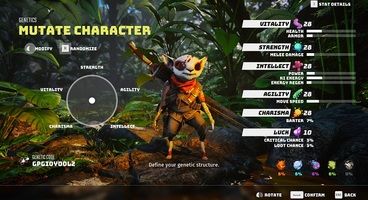 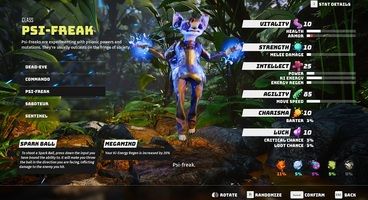 Biomutant features six playable character breeds which also happen to be your first choice during character creation. Regardless of which one you fancy, your elemental resistances, which determine your capability to survive in highly contaminated areas, stay the same. Their stats, on the other hand, change, as detailed below:

While some of these downsides might sound drastic, they're really not. You'll see why in a bit. The very next step lets you "mutate" your character, which is essentially a way to define its main attribute. You can choose a heavy bonus for something like Strength or Intellect that complements your breed's bonuses, but can also go for a more balanced starting build, or in a completely different direction.

Since stats are distributed around a circle, the more you lean into one, the more its "opposite" suffers. Your choice also alters your character's appearance. Here's what each stat does: 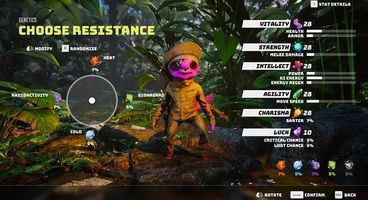 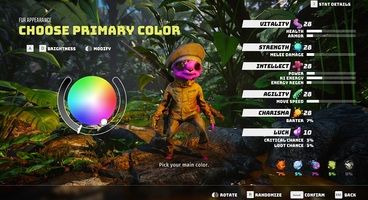 After picking your breed and main stat, Biomutant's character creation process asks you to select your character's resistances from a total of four: Heat, Biohazard, Cold, and Radioactivity. The higher their amount, the more time you can spend in areas where these hazards are present.

They largely play into the exploration aspect of Biomutant. Side quests also eventually lead you to discover gear that grants further protection and even suits that let you completely ignore them. You can also improve your resistance while leveling up, so don't think too hard about this choice.

Then, you get to pick your fur style and colors. This is purely cosmetic, so follow your tastes. The next step involves picking the class you'll play as throughout the entirety of Biomutant. You've got a total of five choices:

This is the final step in your Biomutant character creation journey. Breeds, classes, and resistances do determine a lot about your avatar when it first starts out but it's important to note that they don't stop you from experimenting with your builds or pivoting towards a different playstyle.

It's best to think about them as initial guidelines. You start off as a caster whose Psi-powers are stronger but there's nothing stopping you from also increasing your melee damage and adopting a hybrid playstyle. Biomutant actually encourages the use of all the tools in your arsenal (Psi-powers, melee, ranged).

The gear you find while playing and the way in which you distribute points when you level up have considerably more weight in your character's development than your starting class or breed. While you shouldn't rush through all the choices listed above – since only some, like appearance, can be changed –, you can end up sampling everything that Biomutant has to offer.

For our thoughts on the game, check out our Biomutant review.