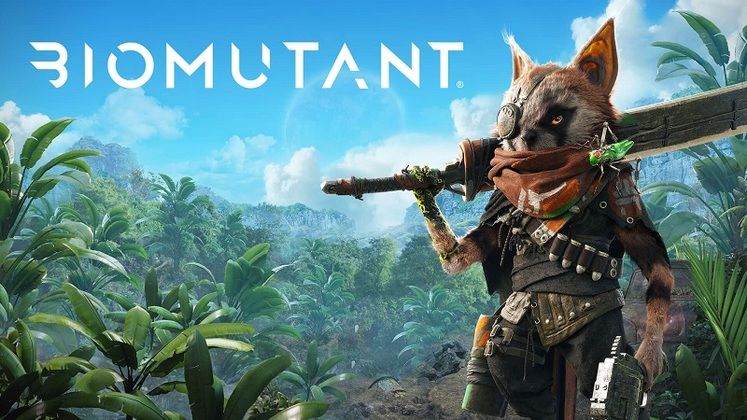 Biomutant’s exterior world is a sight to behold. Lush, green pastures stretch as far as the field-of-view allows, dotted here and there by abandoned homes, forgotten power plants, wooden forts, and shards of former cities. Dense forests and their tall trees make you feel safe when rain surprises you while out in the open. Mountains tower above the dry desert, inviting adventurers to find a path to the top just in time to get a great view of the sunset.

The Toxanol corporation’s indifference towards the environment has left a clear mark on Biomutant’s world. Nature reclaimed parts of the land but radiation, oil spills, and other toxic remnants of the past still linger on. Some of the mutated, furry animals inhabiting it have built makeshift societies and you step into the shoes of one such creature, which you can customize to your liking. You can choose between several classes that affect both your starting stats and look, but they only act as initial templates, both in terms of abilities and appearance. As you level up, you can bring the full brunt of Wung-Fu upon those standing between you and deciding the fate of the world. 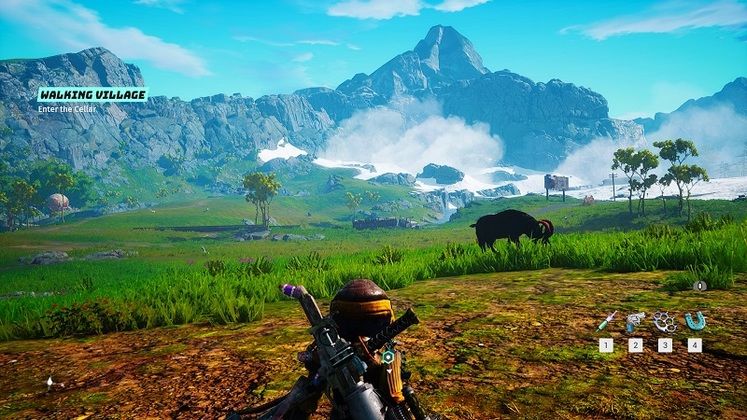 Seamlessly switching between equipped Psi-powers, melee, and ranged weapons lets you change up your character’s moveset on the fly, making combat another of Biomutant’s strengths. You can pelt an enemy with psionic missiles or good old rifle bullets from afar, switch to a shotgun as you close in, then dish out some serious damage using flashy moves while wielding a massive two-handed sword, a radioactive carrot, or quicker one-handed weapons. There’s room to specialize but the allowed flexibility also means that more balanced builds can work.

Lighter weapons translate to quicker strikes dealing less damage and letting you dodge faster, while heavier ones make up for their slower attacks by hurting way more. The same goes for ranged weapons, which behave differently based on their type and constituent parts. Each weapon type also has a handful of unlockable Wung-Fu combos – the game’s take on martial arts – that you can use to dish out additional damage while looking even more badass. Once you’ve pulled off three different Super Moves, you can enter Super Wung-Fu stance, which turns you into a fighting god for a few seconds.

There’s a decent amount of enemy variety but few foes that really stand out, discounting the kamikaze grunts able to survive the explosions they trigger. Fights usually pit you against one big creature, several smaller enemies, or a mixture of the two. But whether they wait for you near points of interest or pull off sneaky ambushes as you roam atop your mount, they often feel put there because some combat needs to happen, instead of being an organic part of the world. 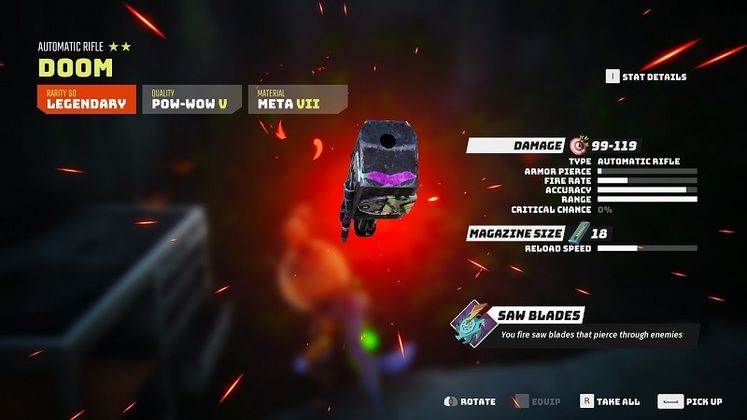 Loot is a big part of Biomutant. Scavenging and quests both reward upgrade parts as well as new weapons, but crafting is the main way of improving the clothes and guns you wear, while also allowing you to expand your arsenal. Clothes grant a set amount of stats, as well as a set number of slots for addons which increase the amount of provided armor and critical chance. You can also use rare specialized tables to further upgrade your items. Guns and melee weapons are literally stitched together from leftover parts, all found around the world or purchased from vendors, which is a lovely thematic touch.

They come in different rarities and there’s a surprising amount of visual variety that results in many wacky-looking lethal tools. Some parts make your automatic rifle shoot sawblades instead of bullets or let you deal double damage after being hit by an opponent. You obtain crafting resources both from totems spread around the world and from dismantling gear in your inventory, but will want to stay on top of the latter, as menus can get a bit cumbersome to navigate when you store too many items. You always have the option to slap a new part onto your awesome blade and make it slightly more deadly.

The means by which you find these parts and most of the armor, however, aren’t as fun to engage with. Biomutant’s woefully unimaginative missions quickly fall prey to repetition. You’ll follow markers to locations where you interact with a gadget from the old world, like a TV or a radio and solve a simple puzzle, rummage through drawers, lockers, and various appliances, kill a pack of foes, or a blend of the three. You end up familiarized with most of the missions within the game’s first couple of hours and will only break away from their pattern in scarce moments such as major boss fights. Even the part of the world that you mainly explore using a massive, powerful mech feels tedious after a while, which is a shame. 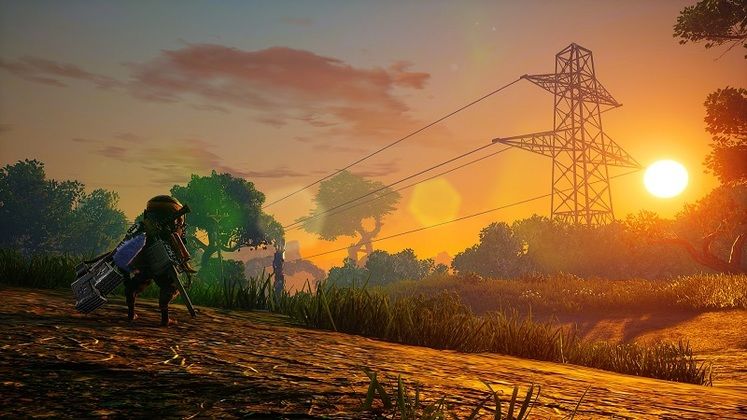 You can head in any direction, provided you can deal with high-level enemies. This is also facilitated by the many fast travel points – which you mark by politely urinating on them – and side quests that lead you from one to the next, like breadcrumbs. Start walking or riding your trusty mechanical hand, and you’re bound to find something to fight, dig up, or scavenge for loot that exposes you to new fashion styles.

But, at the same time, the game’s loose structure robs the story of any gravitas whatsoever. Its frustrating first hours, during which frequent cutscenes constantly interrupt gameplay do a poor job of making you invested in your character’s tragic beginnings. The narrator remains an annoying presence throughout your journey, acting as a translator for the locals’ gibberish. Thankfully, there’s a slider that reduces the frequency at which he talks while you’re traveling across the map, although you’ll be hard-pressed to get rid of him in cutscenes.

You’re then quickly introduced to the alignment system, before being thrown into Biomutant’s tribe war and tasked with picking one of two clans you know little about. The game fails to establish a broader motivation for your character at every pace, only really tethering you to your personal rival that appears very rarely throughout the game, almost as if the main story was an afterthought. You are constantly painted as the sole person that can determine the fate of the world – for some reason – but that’s never properly enforced. When several paths open up, as part of both main and side quests, the threads connecting them feel thin, failing to give a strong sense of purpose to any of your pursuits. 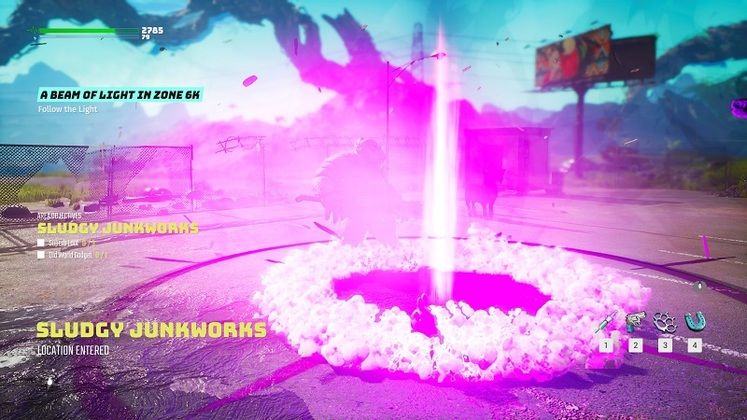 Alignment determines some of the skills that you can unlock while leveling up and lets you listen to a few funny exchanges between the two spirits representing its sides, Light and Dark, but lacks notable lasting consequences. A number goes up as you reach a certain degree of good/evil which affects the ending cutscene, most characters on the critical path have a line referencing your view on things, and that’s about it. Following the Dark path does unlock a power that summons a massive pink death laser from the sky, which is a redeeming quality, but we never got that proper sense of having a rampant disregard for life and a burning desire to see the world, well, burn, while actively pursuing it.

The Tribe War itself is somewhat tied to alignment but also feels shoddily put together. Although the initial offering is limited to just two, you can choose between a total of six tribes, provided you explore the world and find their strongholds. You’re not immediately aware of this during your first playthrough unless you’re curious enough to examine all menus beforehand and read the descriptions of each tribe. The initial dialog with their leader outlines their plans for the world and ideology, but that’s about as deep as they get. They’re shallow vessels for a small set of beliefs, rather than fully-fledged factions.

The Jagni, for example, want to see the Tree of Life destroyed, the world rebuilt, and themselves as the only dominant tribe. They’re power-hungry oppressors for all intents and purposes but their control of the world translates into seldom seeing them imprisoning people in a few small settlements. As you conquer outposts, you’ll find their guards stationed there, and you’ll occasionally see them fighting other tribes in a few, clearly designated spots. But all of it feels so artificial that it never creates the sense of a conflict engulfing the entire world or even the areas you’re actively trying to control. 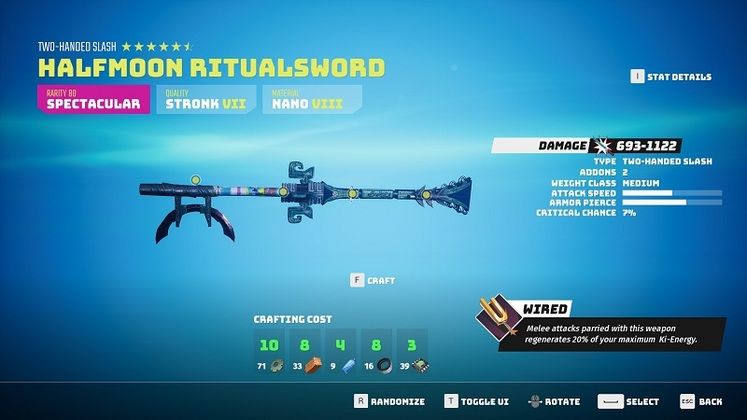 Conquering outposts and forts is mildly fun, but that’s largely thanks to Biomutant’s great combat. Although this unlocks your chosen tribe’s armor and a set of special weapons as you deal with the others, it just feels like another task on your list. This was precisely why we accepted the other tribes’ surrender after vanquishing two of them. What started off as an effort to expand the tribe’s power across the map and paint it in its color, quickly fizzled out due to how shallow everything felt.

The characters that you meet along the way each have different occupations reflected in their cool models. Those that help you throughout the main story usually work on contraptions to deal with the large monsters munching on the Tree of Life. But formulaic quests and dialogs fail to make anything about them memorable. Playing as a Dark-inclined character, each one always reminisced about our character’s childhood while expressing disappointment at both our desire to see the world destroyed and choice of tribe. Their personalities don’t extend much beyond that, making it really hard to care about them, especially once you’ve put their quests behind you. There’s some flavor here and there – a barber asking you to find tools so he can give you a haircut, a fisherman looking for clean water – but not quite enough.

Clear efforts have been put into making Biomutant’s combat, crafting, and visuals look and feel great and this is what kept us playing for a whole 30+ hours and looking past brief frame drops and hitches that occurred regardless of graphics settings. There’s a lot to do if you’re up to it, but the repetitive nature of its quests gradually kills momentum while its story and characters make it hard to be invested in its high stakes. Kicking some butt, exploring the world, and scavenging for awesome upgrades can be fun in short bursts. But the moment you try to engage more with its shallow writing and tedious objectives, Biomutant’s cracks begin to show.

Biomutant’s strong presentation and beautiful world invite exploration, while its combat makes you feel like a badass magic-flinging, gunslinging, Kung-Fu warrior. Sadly, its tedious missions and weak story make it increasingly harder to stick with the game the more of it you play.

Pulling off multiple Super Wung-Fu moves in a fight, then getting to see the sunrise over the land as the last enemy fell at our feet.