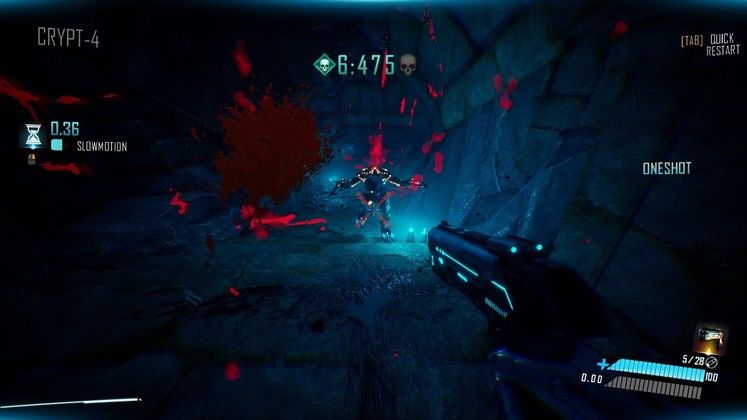 In hindsight, a community-led First-Person Shooter with an emphasis on literal speed-running is a concept so enticing, that it’s somewhat surprising we haven’t seen anything as committed to it as Warstride Challenges is before now.

I already love the frenetic first-person shooter revival inspired by indie throwbacks and id Software’s DOOM reimagining. To see so many exciting variations of the games that made the late 90s PC gaming space such a thrill is especially sweet because it had started to feel like we’d never truly go back to the purity of bombing around maps at high-speed, bunny-hopping, and gibbing demons in a blood-splattered ballet of ultraviolence. 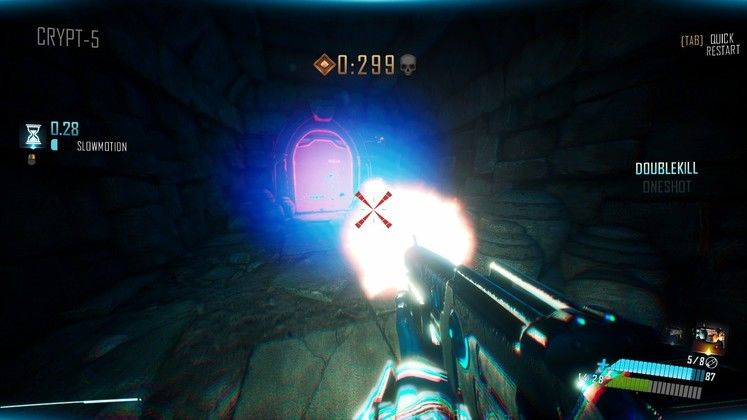 Warstride Challenges bottles that feeling and turns it into a sport. It puts players through a hellish, escalating gauntlet of carnage and peril as they strive to blast their way through hordes of demonic foes against the clock. This is a game that expects you to die, and make a very cheap funeral because it wants you chasing high scores at the expense of your mortality.

The key to success in Warstride Challenges is pace and rhythm. By utilizing the greased-lightning speed and instinct-based twitch control of classic arena shooters to fuel the game’s chaotic trials, developer Dream Powered Games taps into the rhythm action aspect of that formula where you effectively hit ‘the zone’ and push out all outside influence to get lost in the beat of traversal and combat. You soon learn where to use the slow time ability effectively, when exactly to hit a boost pad, and what order to obliterate your foes in.

Serving that up in tantalizing slices that just beg you to give it another go, and push for a better score also taps into one of the most primal gaming impulses. 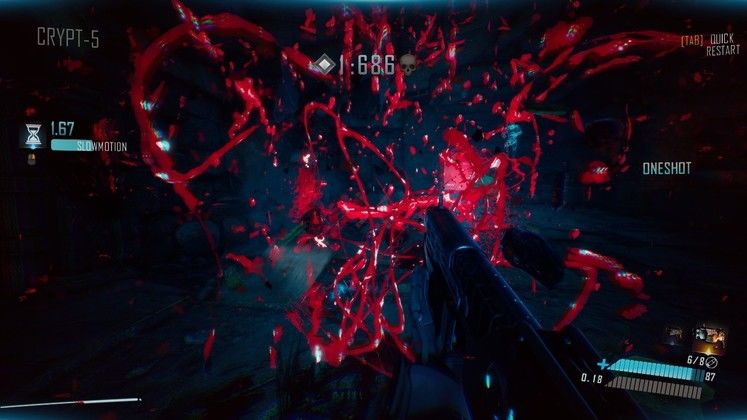 Your demonic foes make a bit of a mess
Warstride Challenges is currently available at Fanatical for £33.74/$18.96.

Leaderboards and ghost runs incentivize and challenge you to do better, and allow you to pit yourself against literally anyone else who’s played the game. It’s truly remarkable how a game so deeply engrained in first-person shooter history manages to switch gears so confidently to incorporate different genre mechanics and systems.

The real kicker though is that anyone can dream up their own demented Warstride Challenges run with the game’s level editor. It’s obviously still not the finished article, but it clearly does the job well enough to encourage the more creative among us to add more to an already sizable Early Access game.

There’s a few rough edges to the technical side at the moment. It’s nothing too serious though, and considering Warstride Challenges is in an embryonic state, the current package is quite impressive. The road map promises plenty more on the horizon, and the community aspect could well be key to the game’s success. For now, at least, Warstride Challenges seems to have gotten off on the right foot.