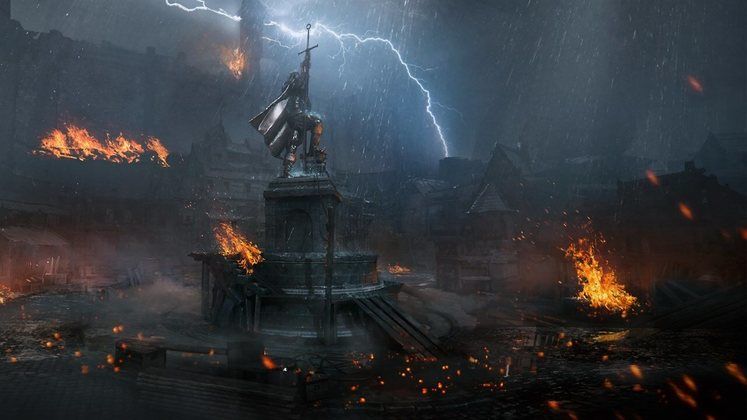 Vermintide 2's Back to Ubersreik DLC tasks players with - among other things - hunting down special runes that aren't all that easy to figure out.

The aim of this guide is to help you find Warhammer Vermintide 2 Back to Ubersreik DLC Runes with as little fuss as possible, in as few steps as possible. That's not to say there's not a fair bit of footwork ahead of you, but we do hope this guide helps you in the task at hand. 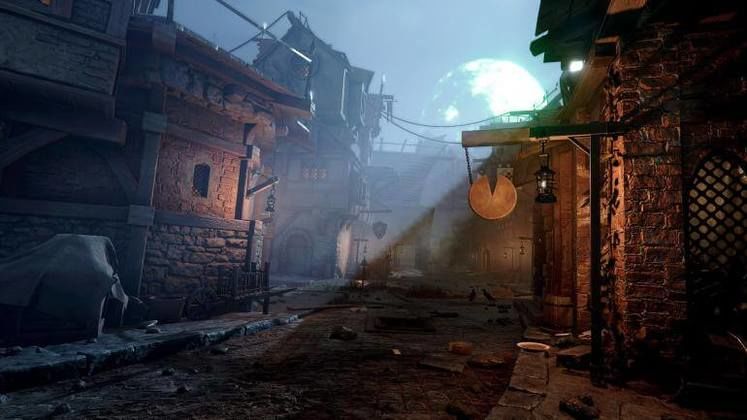 The first of Ubersreik's three new levels, Horn of Magnus is a sprawling labyrinth of buildings and clutter that plays host to 10 suspicious bricks that players can interact with. To find the Horn of Magnus rune, players must trigger the 5 correct bricks in the correct order in a single playthrough of the level, which is pretty taxing when you take Vermintide's chaotic combat and hordes of enemies into account. For that reason, we'll mention only the 5 bricks you need to trigger here, so you can safely ignore the rest.

First brick can be found early in the level, just before you enter the garrison. Don't head up the stairs right away, but turn right instead, and look for an interactive brick that's hidden behind a crate propped up on the wall to your right.

Second brick is located after the pig pens, by the small bridge that you usually run past. Reach the gate that's a bit further ahead - you'll recognise it by the wagon that's parked close by. Facing the gate, look behind the crates that are to the left of this wagon.

Third brick isn't far, either. Instead of going through the gate, go into the alleyways to your right. Take the first left and look for a cellar door just ahead. Head into the cellar and hug the rightmost wall until you reach a small alcove at floor level. That's where you'll find the third brick.

Fourth brick requires of you to reach the Jungfreund Platz, take a left, and then jump onto raised crates that lead to a wooden beam. Get across the beam and climb the nearest rooftop, then go around the corner and drop down onto a small, not-easily-visible stone ledge. You'll find a tome there, and the fourth brick will be just behind that tome.

Fifth brick is tucked away in the inn that's just past Jungfreund, past the stairs that lead to the rune chamber. Enter the inn and go behind the counter. The brick will be on the nearby pillar.

When all five bricks have been interacted with (without touching any of the others), Olesya will contact you with a message that something's changed. Go back outside and into the rune chamber. Keep in mind that, even after you've already transcribed this rune, you will still have to successfully finish the level for it to be unlocked in the Keep. 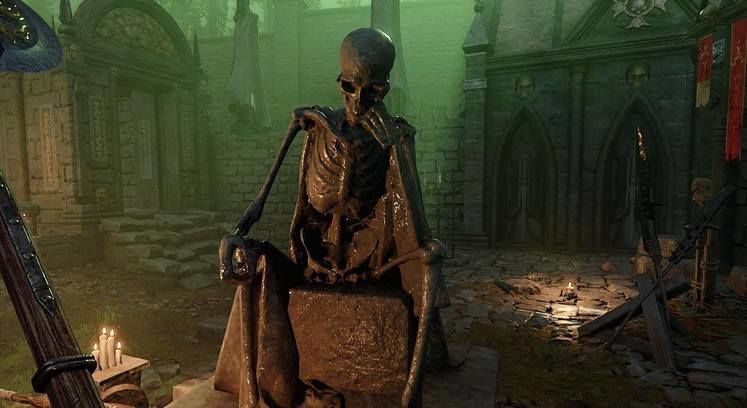 In Garden of Morr, you'll have to find and light all four of the candles in the main graveyard area that players reach after the 'Find the source of the green poison' objective. In the crypts to your left, there will be a pedestal with an interactive skull placed on top of it.

It's important to note that, whereas you could take all the time in the world to find the Horn of Magnus bricks, interacting with the Garden of Morr skull requires of you to light the candles under a moderately-lenient time limit. This is why it would be wise to scout the area and familiarise yourself with the layout before actually triggering the skull.

First candle is located just behind the crypt where the skull is. Go inside and turn left until you reach a small courtyard. The candle will be on top of a headstone in this location.

Second candle can be found right when you head back to the graveyard "hub", if you jump over the back wall. Go to your right after the jump and the candle will - again - be on top of a nearby headstone.

Third candle requires of you to return to the main graveyard area, jump onto the nearest cart, and then over the fence. There will be a pillar right in front of you, so head in that direction, and look for the third candle at its base.

Fourth candle will call for yet another return to the "hub". Run towards the back, just past the crypt, and look for another pillar similar to the one you find the third candle at. The final candle will be tucked away on the other side of this pillar.

When all four candles have been lit, the big crypt will open, and inside you'll find an empty tomb with a broken gargoyle head. Not what you expected, we bet. Bear with us, as the puzzle isn't over just yet. You'll have to pick up the gargoyle head and take it with you through the whole level, all the way until the final cauldron encounter.

You can safely drop the head to fight enemies, though you will definitely want to keep an eye out because losing it will call for a restart of the level and for you to do the candle puzzle all over again. To unlock the Garden of Morr rune, you'll have to reach the stairs that lead up to the final cauldron encounter, and then look for an open window to your right. Go through the window and drop down onto the ledge, at the end of which will be a headless gargoyle.

When the head reaches its unlucky owner, Olesya will let you know that the rune chamber has been opened, and you can drop off the ledge to a lower level where you'll find said chamber. Same rules apply here as they did for Horn of Magnus: be sure to successfully finish the level to actually unlock the rune. 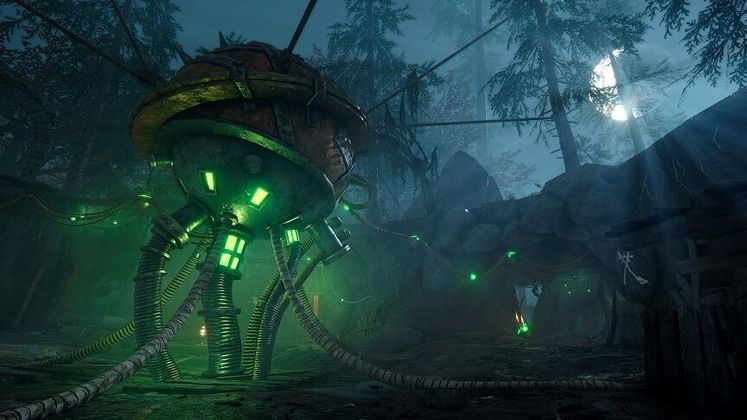 Engines of War rune is technically the trickiest due to the fact that the match host has to do one part themselves, otherwise you won't be able to unlock much of anything.

When you enter the first cave section of the level, hug the leftmost wall until you reach a partially-hidden passage leading out to the open area with a chest. Once there, turn around and clamber up the rocks to reach a tucked-away alcove just above the door you came in through. There will be a torch here, and the host will have to pick it up and carry it for a bit.

After you reach the bridge overlooking the canyon, head on through the forest until you reach a huge log you have to pass through. Turn right just before getting into the log, then go forward until you find another, smaller log. Jump on top of it, then jump onto the large war banner in front of you. Then, look to your left and jump onto the ledge that's visible from there, and then just follow it until you get into the tower.

This is where the host and their torch come into play, as they have to throw it into the fireplace inside the tower, which will illuminate the room. Make note of the three models on the table in this room, as that's the solution to this level's rune puzzle. We'd tell you what it is, but we can't, because the solution/order is random and unique to each run. Taking a screenshot might not be a bad idea.

Afterwards, proceed with the level normally until you finish the Doomwheel encounter. When you're about to leave the courtyard and head down the river, turn back just before the final archway and look for wines that are growing on the wall. You'll be able to leap onto these, and follow them across to ledges leading to an upper level of the area.

At the very end of this gauntlet you'll find 5 different statues, 3 of which will be matching the models you saw on the table in the illuminated tower earlier. Reference your memory or your screenshots, and then interact with the skulls at the base of each correct statue in the same order in which the models were placed. Upon successfully doing so, Olesya will let you know that you have, in fact, done something right, which means the rune chamber will open up.

The rune chamber will be just behind the newly-opened stone wall in the statue room, so at least you won't need to backtrack this time around.

We hope this guide helps you with finding the Ubersreik DLC runes, because they're not a very simple thing to track down at all. There's more handy Vermintide 2 guides to be found on Game Watcher, too, such as the extensive Grimoire and Tome location guide.

For more information on Vermintide 2's next major DLC, Winds of Magic, be sure to keep checking Game Watcher.