Alliance of the Sacred Suns 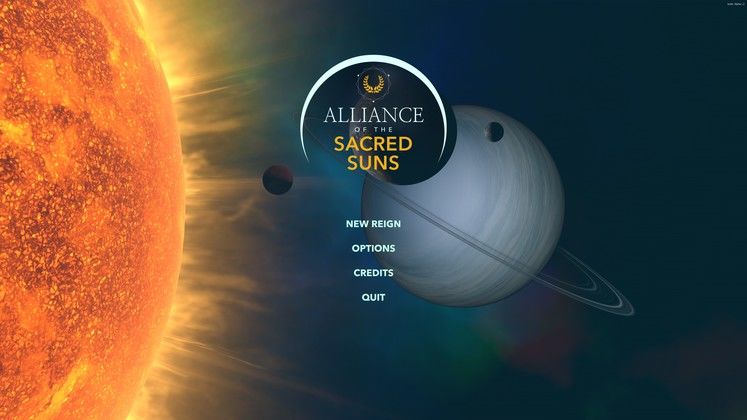 Ever since Paradox released Stellaris, the sci-fi grand strategy market has been a bit cornered. Year after year, dozens of games both indie and AAA launch in a bid to dethrone the Swedish title, but for the first time since 2016, grand strategy in space has a worthy contender.

Alliance of the Sacred Suns is KatHawk Studios’ first game – a turn-based grand strategy title set a thousand years into the future as humanity’s decaying feudal-like Celestial Empire rules the stars from the capital planet of New Terra. Newly stated as the new Emperor following the untimely death of your father, it’s up to you to unite the fractured echelons of mankind and bring the Noble Great Houses together for the good of all. 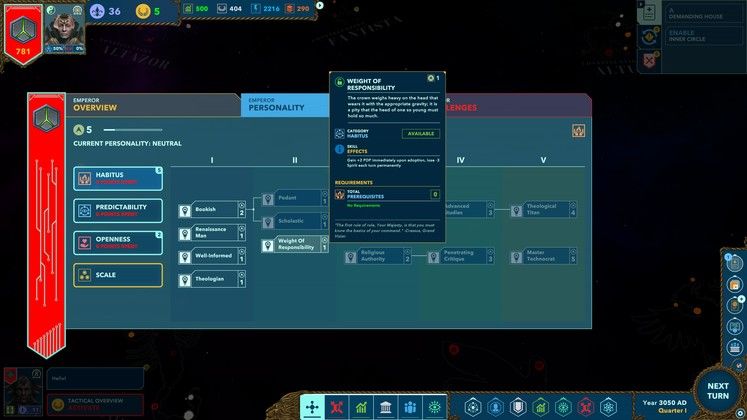 Unlike other space strategy games, Alliance of the Sacred Suns (AotSS) is more about characters and relationships than resources and micromanagement. Instead of playing as god-like non-entity without a real bodily manifestation on the game’s universe, you play as a real flesh-and-blood person occupying the seat of the Emperor, with all the pros and cons that brings. As anyone with any amount of real life power can attest, being in charge is as much negotiating with other people to get your will done as it is about deciding what should be done.

“What should an emperor be able to do? What do they worry about? What does the big picture look like? And most important, what holds them back? We want the player at the end of the day to feel like they are a human being, not an omniscient grey eminence that they essentially play in most other 4X games, so staying true to that core design tenet is a challenge and a mantra for us,” says Steve Hawkins, founder of KatHawk Studios. 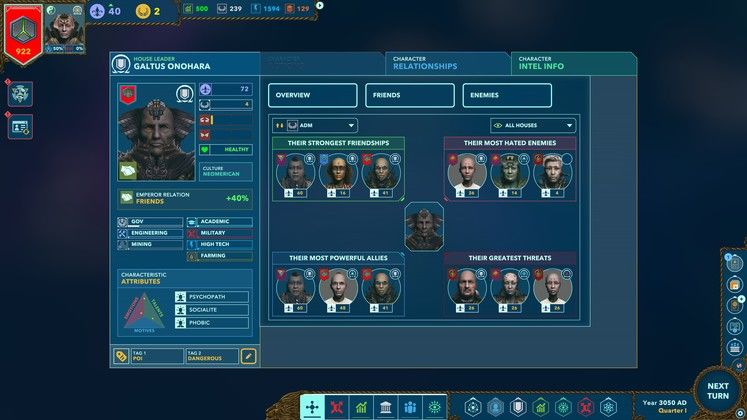 “We also wanted characters to be a considerable check on your power and strategy - in every other 4X game,” he continues. “There’s nobody saying ‘wait, you can’t do that’ or ‘I won’t allow you to conduct genocide on another culture’ - in AotSS, characters can and do check your power, as they do in real life, and those relationships and who to focus on - you can’t please everyone, and you shouldn’t try - is a huge part of the strategy.”

That balancing act is a core part of the gameplay loop, since you need social interactions to accomplish everything from trade deals to warfare. Each aspect of your empire is handled by a specific person in a specific position, so you got advisors responsible for diplomacy, espionage, intel gathering, trade deals, military movements, and sector governance – everything takes place through the eyes of your Emperor (aka the guy who doesn’t actually do anything), so delegation of duties and talks with people that are actually in charge of things are an essential part of turning your decisions into reality. 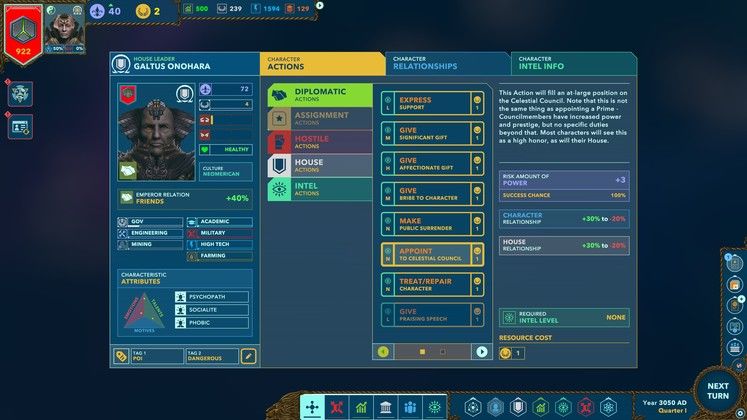 As such, character interaction ranges from praising and insulting someone all the way to offering gifts, bribing them, or simply getting to know them. As your actions improve or damage your relationship with other people, the balance of power shifts accordingly – their friends may like you more as you two get closer, while their enemies may develop a grudge. If you like someone enough, you can even invite them to your inner circle or offer them a position in the Celestial Council, granting them immense power and making sure their house will be very pleased.

“We wanted the Emperor to feel ‘real’, and one thing that I really missed in the excellent Crusader Kings series of games is that you couldn’t really ‘talk’ to the characters around you,” says Hawkins. “I always felt limited by the number of actions that I could take, and wondered what CK would be like with far fewer characters but a vastly expanded character interaction and conversation system, so that’s what AotSS has.” 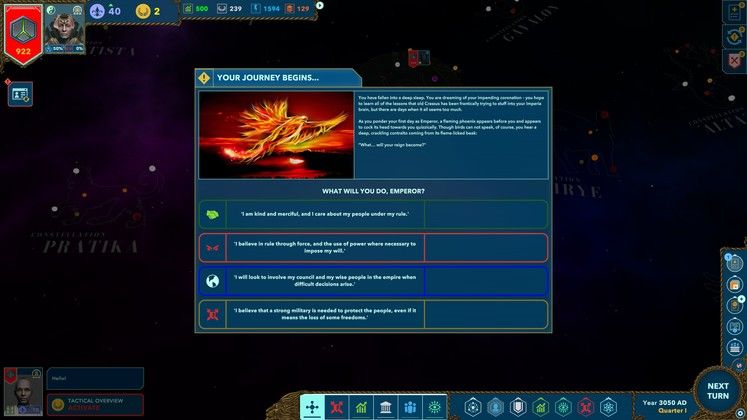 Curiously, AotSS is a bit of a “medieval in space” setting – instead of taking place at a time of unparalleled progress at the dawn of a new age of exploration like most sci-fi strategy titles, Alliance of the Sacred Suns takes place as the whole Empire is falling to pieces.

“We thought about what humanity would look like a thousand years in the future, if it kicked off its planet of origin, settled in a far corner of the galaxy, and found itself essentially alone after suffering through two alien wars of extinction,” Hawkins explains. “We felt they’d be pretty bitter, fairly static and fatalistic, and slowly revert back to a humanity of an earlier era, where people who felt the government/Terran Federation had failed them would look for smaller units of organization, centered around their dominant culture. That’s how Houses formed in the AotSS timeline.” 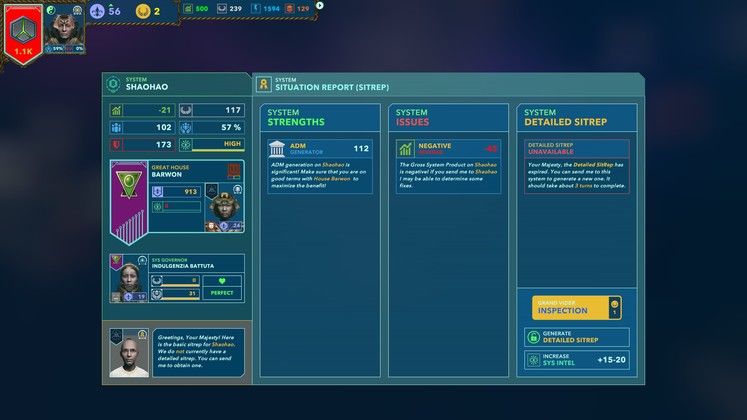 That timeline is one of the most interesting details of the game, providing a full background and worldbuilding everywhere you look. The whole game takes a unique and quite novel diegetic in-universe approach, where every single menu, victory condition, and even the mouse are actually a representation of the tools the Emperor would be using. You are not controlling a space ruler through a virtual interface – you are the space ruler.

“We’re trying to sell the player on a fully realized universe a thousand years in the future; the AotSS timeline and universe is ripe for discovery, and we feel it’s quite unique, so we wanted to reference that wherever possible - tooltips, quotes, art, conversation, etc,” says Hawkins. “The culture system and the Great Houses arose directly from the modern/medieval feel we are hoping to achieve and that is quite rare among space strategy games these days. In short, we want the game to be about YOUR story - you start until you’re 18, you run an empire for better or worse, maybe you save humanity along the way, and then you die (or go immortal) – but there are no dynasties. It’s YOUR story, and we want players to have fun recounting their emperor’s crazy reign the same way people talk about Dwarf Fortress legacy fortresses or Minecraft worlds. We want the journey to be what people remember about the game, not just the victory goals.” 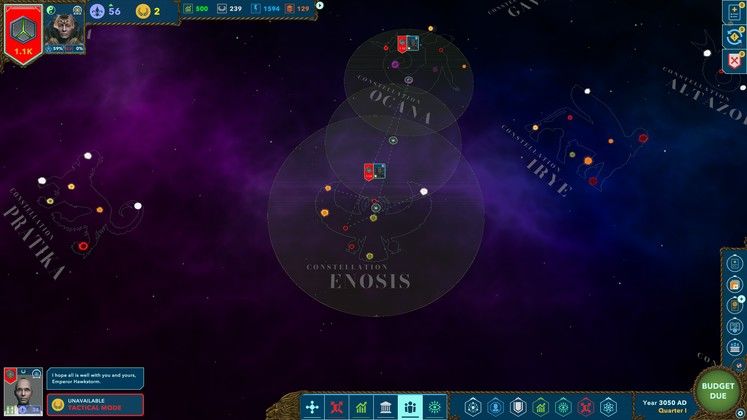 To add to that, part of the appeal of being an Emperor in AotSS is realising you are still just a person. I’ve interviewed quite a few CEOs, CFOs, and other C-suite people in my time as a journalist, and one of the most recurrent and surprising things they’ll tell you is that their calendar and agenda doesn’t actually belong to them – high powered people make decisions, but they have so many things to take care of that they are unable to control their own schedules. To help you keep on top of it, AotSS provides you with a nifty situational report at the start of every turn or loaded game, granting you a quick-glance document with every single crucial bit of info not unlike the Presidential Briefing that the real life POTUS gets.

That SITREP actually embodies one of AotSS biggest strengths: its UI and clear understanding of management needs. The game is remarkably pretty and charming, with very clear, readable animated UI and multiple organised menus that make running an empire preposterously easy. You got character nexus, diplomacy menus, budget reports, and more that are both functional and pretty – a feat only achieved by Endless Space 2 so far. Add to that the handful of 3D objects that come up when you scan a planet or star system, and the end result is a rather attractive design identity that makes it quite pleasant to spend hours dealing with the many virtual people in your virtual Empire. 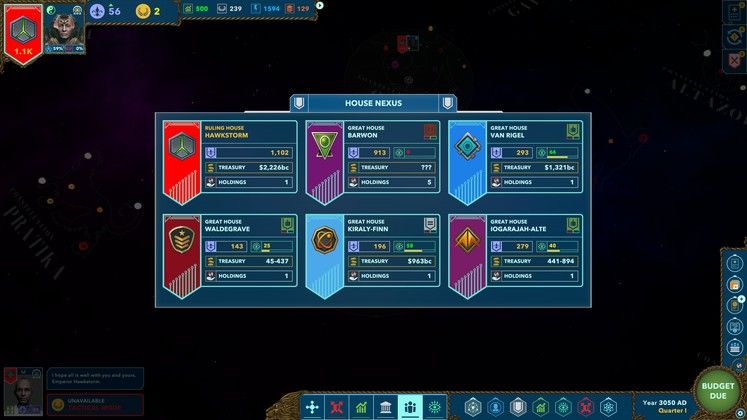 The music is also especially good, featuring some very involved compositions that range from the mellow and ambient to the cataclysmic and epic. The production values of the game are high throughout the board, with art assets, writing, and presentation matching the high standard set by the slick pretty visuals of the animated UI menus.

The game is still in Alpha, which means there are still some quality of life improvements to go. While I love the 3D planets in a couple of screens, it would be fun to have more 3D objects around in close-up views, such as stars and other stellar phenomena like black holes and nebulae. It would also be amazing to zoom out more in the galaxy view and zoom in into sectors using only the mouse wheel – the game misses a few balls on the Stellar Cartography department, and as a result it feels a bit less real and a bit detached and abstract towards your Empire’s geography. 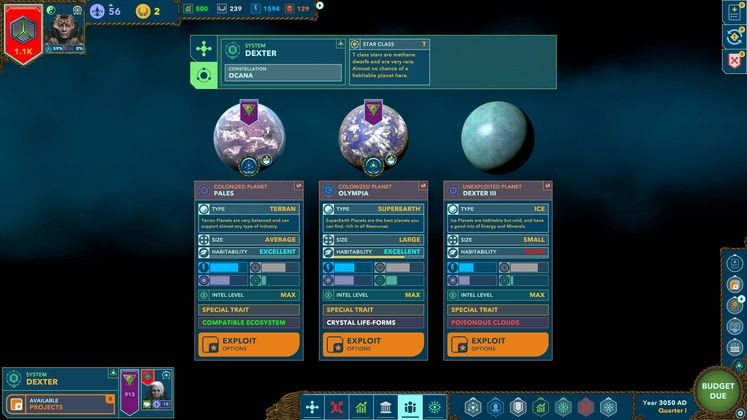 On the more functional side, it would be useful to be able to open menus on top of other menus, instead of the current limitation of only one menu open at a time. I’ve had several instances where I was examining a potential new advisor or trying to decide on a budget issue, and I was unable to just open one of the other menus side by side and compare the stats or get the information I needed to make my decision. Having to back down several steps from deep into a menu to be able to look at another table, just to have to reopen the first menu all over again quickly took its toll. Similarly, there are some menus such as diplomatic actions and budget allocation that include arrow buttons, and I really wish I could navigate those options and pages by scrolling the mouse – clicking a button 32 times to allocate 32% of budget to savings is rather tiresome, as is having to click back and forth in every diplomacy screen to move the buttons sideways.

Still, those are minor things that can definitely be fixed before beta, let alone launch. The core of Alliance of the Sacred Suns is surprisingly polished and extremely competent, and Hawkins both has a thorough grasp of the necessities of this novel diegetic management and of how to make them fun. When asked about how he was able to break with sci-fi tradition and make an engaging game where you still retain freedom and power while playing a single individual, he attributed it to his past experiences as a gamer. 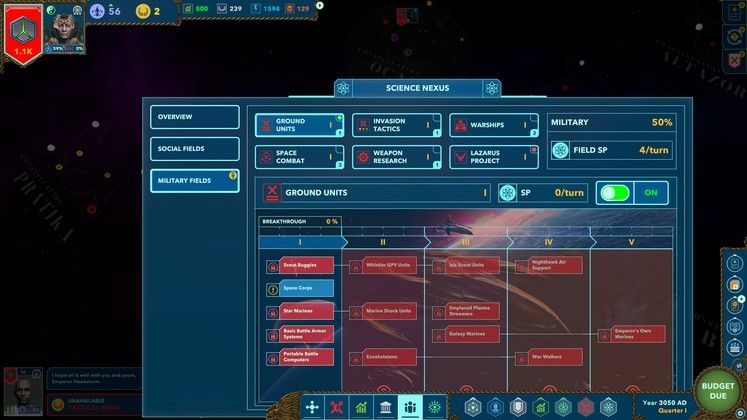 “I am an extreme veteran of virtually all 4X/Paradox scale strategy games made in the past 30 years,” he explains. “I love this genre, I grew up playing it, and I always made notes to myself about how I would improve a game that I was playing, to the point where I finally taught myself coding and programming and set out to do something about it! So I’m very familiar with the core game systems/loop of these genre games, and could draw from that experience.”

The truth is I was expecting Alliance of the Sacred Suns to be yet another cookie-cutter 4X in space, but it actually fully subverted my expectations. By drawing from Crusaders Kings instead of Stellaris and by treating grand strategy as a human game instead of a giant Excel sheet, the 5-man team at KatHawk Studios managed to create an intriguing and humane game of geopolitics in space, tackling warfare, logistics, infrastructure, trade deals, and diplomacy through the lens of a playable diegetic Emperor. The game currently has a release date planned for the second half of 2021, so if you are interested in galactic empires that are more about managing people and governments than micromanagement mineral deposits and factories of consumer goods, Alliance of the Sacred Suns should definitely be on your radar.

Alliance of the Sacred Suns Essentials 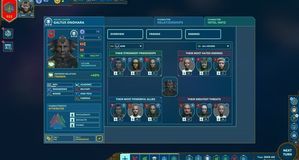