04 March 2013 | By Alex Donaldson
When an Assassin’s Creed themed event invite dropped into my inbox, my response was, I expect, the same as many. Another one? So soon? I’d begun to think that with Watch_Dogs on the horizon Ubisoft might give its biggest hit of the generation a rest – but I was wrong. While it’s still early days, I can say that I’m tentatively rather glad I was – for Assassin’s Creed IV: Black Flag looks to be a far more refreshing, interesting take on the series than last year’s Assassin’s Creed III.

Developed by Ubisoft Montreal with help from Singapore, Qubec and other studios, Assassin’s Creed IV: Black Flag is cross-generational, coming to both the current 360 and PS3, the next-gen level PS4 and presumably one other unannounced machine, the in-between Wii U and of course the PC, which will be able to stretch between the two extremes depending on your machine.


The next-gen horsepower will be put to good use in the title, Ubisoft promise, as the game’s new setting allows them to draw on and deploy that power in interesting says. Set in the ‘golden age of piracy’ of the 18th century, the easiest way to describe the game is Sid Meier’s Pirates meets The Legend of Zelda: The Wind Waker meets Assassin’s Creed.

Which sounds pretty good, doesn’t it?

Players take on the role of Edward Kenway, grandfather of Assassin’s Creed III’s Connor, a British ex-privateer who has turned to piracy. As well as his royal navy training and pirate skills, he’s also been trained by the assassin order. Kenway is one of the many pirate scourges of the West Indies – the modern day Caribbean.

For those who found Connor boring, Ubi describe him in a manner that suggests he might be a little more interesting. He’s estranged from his family and his navy career, and is described as selfish, cocky and reckless. He’s turned to a life of piracy because he can’t stand rules and wants to set his own, combining that with a ruthlessness that makes him perfect for the career.

Assassin’s Creed has never exactly been known for being entirely historically accurate, and Ubisoft really has more crazy myth and legend to work with in this setting than most – but despite that fact, the developers are eschewing such ideas.

They explain they’d like to show the reality behind the fantasy. You won’t find ghost ships or sea monsters here, nor ‘Pirates of the Caribbean’ cliché – real life figures such as Ben Hornigold, Blackbeard, Anne Bonny, and psychopathic pirates like Calico Jack and Charles Vane provide more than enough ammunition. Also included will be several real-life events of the era, such as the Wreck of the Spanish Armada.

Assassin’s Creed III’s ship-based combat was one of the strongest elements of the game, and much of that carries over here. Ship combat is described as improved and expanded, the team having pushed to break away from it feeling overly linear or scripted. Players can seamlessly hop into their ship from any of the game’s islands and while sailing engage or run from any ship they see out in the open seas.


Attacking merchant ships will be easy fodder, but military ships will prove a greater challenge and a danger. They might be difficult to take on early on, but as the game progresses a series of potential upgrades to Kenway’s ship, Jackdaw, will make it more fighting fit. There’s player choice here, and how exactly players build out their ship will determine how they do battle.

Enemies are said to fit into five basic archetypes for combat, and will act differently based on that. One type will attempt to ram the player, for instance, while others will try to keep their distance and blast a hole in Jackdaw’s bow from afar. With ramming and close-quarters combat comes an obvious addition – boarding. Players can have their crew launch grappling hooks to drag ships together, allowing Kenway to get aboard to assassinate key targets aboard the ship amidst the chaos.

The end result, Ubisoft hope, is an open world feel that surpasses the previous titles in the series. The ocean is vast, but combat with other ships aims to give it a dynamic feel – that of a real open world. There are no artificial gateways here – later areas of the game may be guarded by tough ships, but once players can blast past them they can go where they want.

Back on land Black Flag feels a little more like Assassin’s Creed doing its stabbing business as usual. Kenway is armed with dual cutlasses, dual flintlocks and of course hidden blades, and can cause the sort of havoc that made the series its name within a variety of locations.

Of the fifty unique locations Ubisoft promise in the final release, three are major cities – Kingston, Havana and Nassau – which belong to the British, Spanish and pirates respectively. Beyond those fishing villages, plantations, jungles, forts and hidden pirate coves can all be discovered. There’ll be plenty of business to conduct on land, from assassination and combat through to hiring and firing crew for your ship.

As well as above land and on the seas, there’s one final trick up Kenway’s sleeve –diving underwater. Players can deep dive to look for shipwrecks – and even do battle with some of the less friendly creatures of the deep.

While Ubisoft barely touched on it, it’s worth pointing out that the present day story continues here after Assassin’s Creed 3’s rather strange ending. The Assassin’s Creed universe is now running parallel with the modern day, they’re keen to point out – and the story is marching on with time itself. Multiplayer will also be back with new characters, maps, weaponry and modes.


Exploration, an open world and a wider variety of tasks and freedom in which to engage in those tasks are all key to Ubisoft here – and in concept, it’s all pretty damn exciting. Freedom is ‘Wind Waker’s’ greatest asset, and I wiled away many hours on ‘Pirates!’ trading spices and robbing merchants – so combining the two with the quality Assassin’s Creed action excites me immensely.

There’s only so much you can glean about a game like this without going hands-on – and so though seeing the concepts behind Assassin’s Creed IV: Black Flag has helped to rekindle the flame where the third entry dulled it, I’ll withhold full judgement until I actually get to play it. For now, though? This is certainly one to watch. 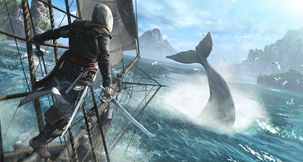 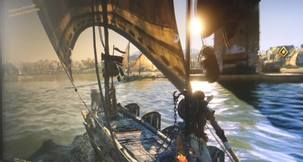