24 August 2011 | By Joe Robinson
It's amazing how entire games can evolve out of the most simplest of desires. Despite the success of Divinity II - especially after the more polished re-release - the developers weren't really happy with dragon combat and how it worked. Months of experimentation and tweaking later, they eventually realised that, actually, there might be something fun here, and thus Dragon Commander was born.

Improved dragon combat would not be enough though, and Dragon Commander is a combination of many genres - action, strategy... even the trademark Divinity RPG elements. Even after listening back to my recording, and reading my notes, it's hard to really describe what Dragon Commander 'is', except that it looks incredibly fun. Also, it has dragons with rocket-packs strapped to the back, so insta-win in my books.

It's not that it's trying to be ridiculous though: Dragons with Jetpacks is about as far it goes and it fits into the borderline-silly humour that the Divinity universe – at least in Divinity II – likes to perpetrate. For example, one of the more strategic 'choices' you can make is which princess to marry – and thus which nation you ally yourself with – and one of these nation's princesses is actually an un-dead skeleton. Each princess has a side-quest as well, and with the skeleton-bride's naturally being her resurrection. Seeing it demonstrated to me, it's a perfect blend of something that's utterly serious and meaningful (in terms of the gameplay consequences) and something that's completely ridiculous (in the sense that you're married to a skeleton that's dressed up as a woman. Poorly).

There's three main layers to Dragon Commander – first off there's your mothership. A lot of the strategy and RPG elements are taken care of here, and it's basically the 'hub' of the entire game. In this space you can outfit your armies - which uses a deck-based card system, talk to your advisors on what to do, and engage in other story-driven elements. The princess stuff mentioned above can also be done through here.

From there, you can also view the second layer, which is the strategic map. Here, you view your empire/holdings which are in the form of countries. All countries generate gold revenue which you can spend, and some countries have special attributes like being a factory country (which allows you to buy more units). You can also move your armies, and choose which battles you want to fighting personally. As the commander, you can only fight in one battle at a time per turn, and any other battles that round are auto-resolved. You can also deploy special cards that augment your armies, or yourself, in battle.

Finally, there's the tactical/combat map – these are always in the air above whatever terrain zone you happen to be above, and involve your army and the enemy army trying to wipe each other out. As the 'dragon commander', you can give orders to your AI controlled units, and you can also get in on the action itself. The game is supposed to be flexible, so that you can just hang back and let the AI do the work for you, do everything yourself, your a mixture of both. There's definitely tactics and strategy involved here, as the enemy will try and flank you, and you need to make sure you whittle down their defences and take down their mothership without using yours.

It's still early days yet, but this is looking like a really fun game. If we're being honest, the whole steam-punk technology-meet-magic thing is a bit of stretch for the Divinity universe, but we're willing to let it slide. Divinity III it may not be, but this is way more than a silly arcade/combat game with dragons. The war of the Dragon Knights is something that gets hinted at through-out Divinity II, so it's a good setting for a game like this.


Dragon Commander looks like it will have a surprising amount of depth, and a decent length campaign when all is said and done. A wonderful blend of action and strategy gameplay, the RPG and meta-game components serve to add yet another layer to this game. Whilst we haven't had any hands-on at this point, the combat controls seem very competent as well. This is one we're definitely going to keep an eye on. Dragon Commander is slated for a release on PC in Summer 2012.

Most Anticipated Feature: Using your Dragon-form to cause havoc is going to be sweet. 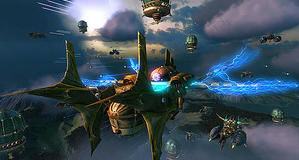