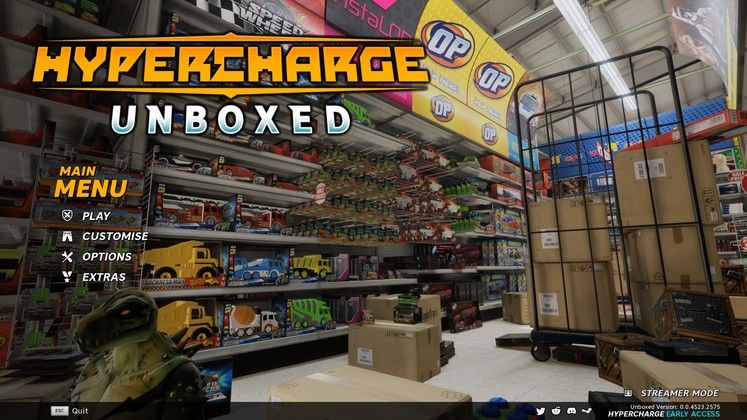 It’s not often someone can describe an Early Access game as “polished”. Nowadays, even AAA titles launch with holes that would be unacceptable a mere decade ago, so when something like Hypercharge: Unboxed comes along, it tends to turn heads.

A tower defense FPS game about toy soldiers, Hypercharge puts players in control of customizable action figures as they defend hyper-cores from swarms of other toys. The battles take place inside ordinary spaces in normal life, such as bathrooms, bedrooms, and toy stores, which take a life of their own thanks to the huge scale they are depicted. When you are a 10-inch tall toy, even a hallway becomes a massive, impossibly complex temple. 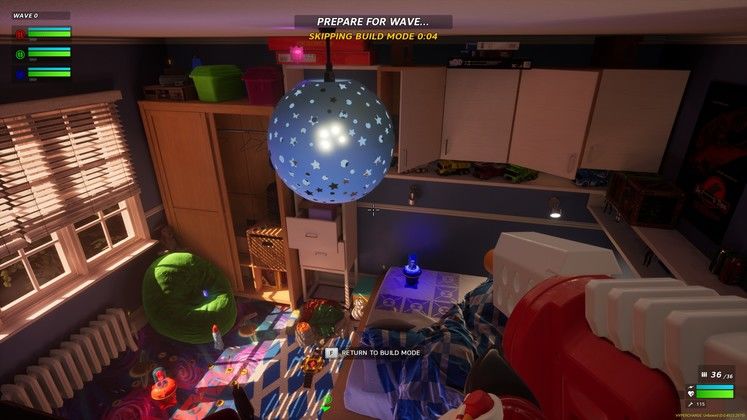 Those environments are a joy to explore and fight in, thanks to the amazing detail put into each level. Players can walk on anything, from door handles and shelves to ceiling lamps and pipes, creating an incredibly immersive playground that rewards positioning and curiosity. From gardens and home garages to arcades and storage rooms, even the most bland scenery of real life becomes strangely inviting from the perspective of a toy.

The one problem with these maps is navigation, thanks to a spotty mobility system that allows you to double jump yet is remarkably unreliable when it comes to mantling – I would sometimes climb objects by holding the jump buttons, while others would require a constant hammering of the button to trigger the climbing animation. Given the size, complexity, and verticality of these maps, more mobility options like jump boots or even a jetpack would be extremely useful – especially given the wonderful thump triggered when falling from great heights. 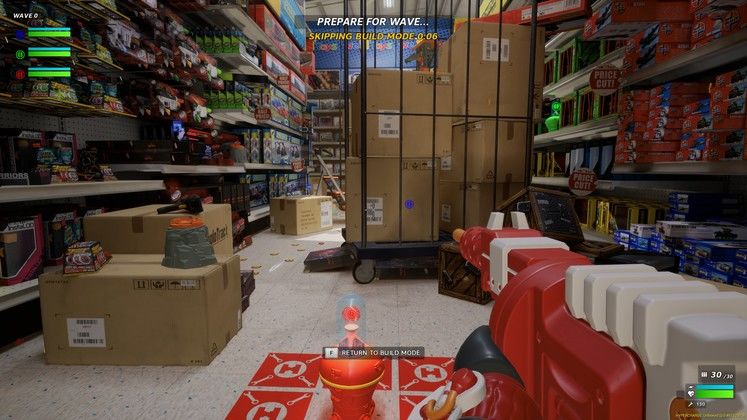 All that navigation is more than just a gimmick, as each map has between one and four hyper-cores spread around which must be defended from waves of enemies that respawn on a timer. Robots, little green army men, and Beyblade-like spinners are just some of the opponents you can face, and the variety of units is impressive; the the green little army alone features infantry troops, tanks, jeeps, helicopters, and even airplanes that drop paratroopers – the later of which can have their parachutes shot out of the sky for an easy kill, in a brilliant acknowledgement of tactical thinking.

The biggest draw of Hypercharge is no doubt it’s production value – both characters and levels are ridiculously good looking, courtesy of both Unreal Engine 4 and seriously talented art designers. Models and textures are high-resolution, possessing a quality far above the expected of any indie game outside the likes of Subnautica. Similarly, weapons have a nice heft and kick to them, which is effective enough to distonate from the idea that you’re firing toy guns – but I wouldn’t have it any other way. 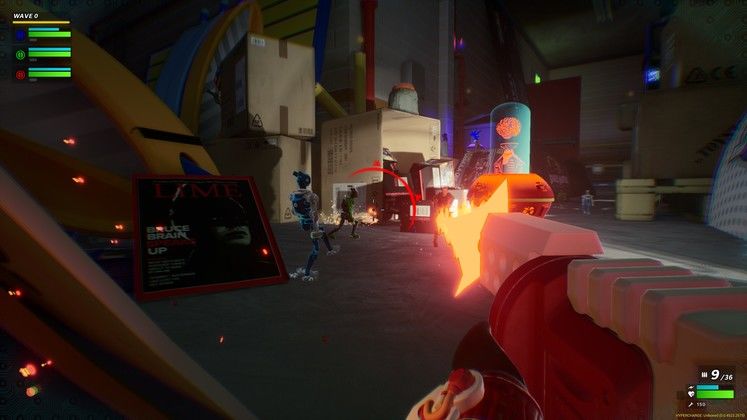 While the presentation is great, the core gameplay loop is decisively uninspiring – Hypercharge: Unboxed is a tower defence game that makes defending with towers a chore. Thanks to an unbelievably restrictive number of slots to place turrets and traps (and the absurd cost to deploy them), traps serve as little more than short-lived distractions that make almost zero difference during battles. Instead of giving players the freedom to place as many traps as they can in a strategically sound manner, the game tries to keep players engaged by making them hunt limited currency coins spread across the map and throws all tactics out of the window. Matches inevitably devolve into a shooting fest that’s not an inch smarter than Killing Floor or Left 4 Dead – which might have been a good design decision in 2004, but it’s definitely dated 15 years later.

Similarly, the game forces players to use specific guns on each level and leaves any attachments and secondary guns to the mercy of randomly generated drops, removing any investment on actual gameplay decisions between rounds. Digital Cybercherries apparently didn’t took to heart the lesson Modern Warfare thought the industry long ago; that players really, really</> like to customise their guns and attachments as well as their characters. 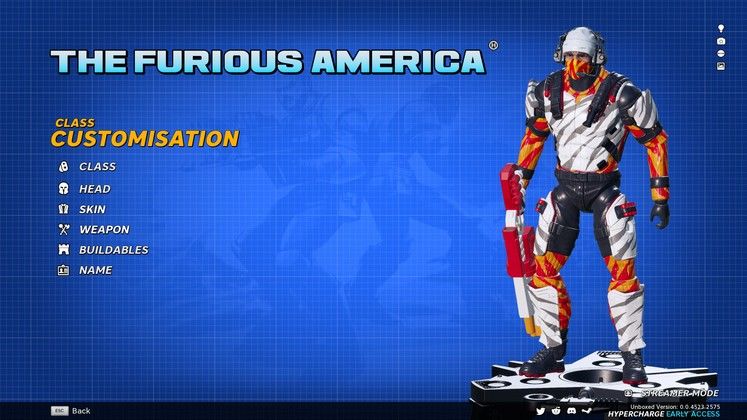 Luckily, the character customisation side of the game is spot on. Players get access to three different action figures, including soldiers and a dinosaur/Argonian/lizard, and can change the material and colours of both characters and weapons. The game also allows you to mix and match names from lists when naming soldiers, creating pearls like Major Electrifying Marksman, Mr Furious America, and Sir Charismatic Secret. Like everything else in Hypercharge, it oozes a personality that puts it leagues above most indies on the market.

Some of my favourite aspects of Hypercharge do not directly impact gameplay, but add wonders to immersion. Players punch their way out boxes at the start of matches, characters follow the mouse with their heads in lobby/customisation screens, and the game bases its fake toys (and brilliant puns) off real brands, populating the game world with wonderful and funny facsimiles that should evoke feelings of familiarity to most people playing it. From Nerf weapons and military models to board games and a wonderfully covert truck that overtly takes a jab at politics, the passion Digital Cybercherries has for toys is apparent at a glance – as is their love for Star Wars products. 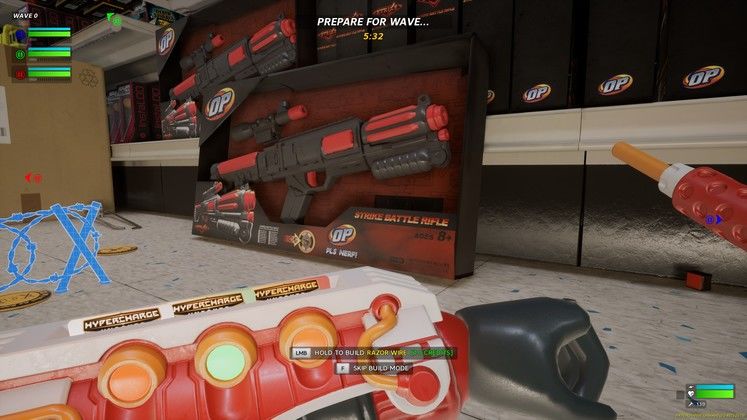 Truth is, I was pleasantly surprised by Hypercharge: Unboxed production values, but slightly disappointed with its gameplay. A generous rebalance of its turret costs and the ability to deploy them freely across the levels (as opposed to spots arbitrarily decided by the developers) would add tons of replayability and tactical value to the genre, while a weapon customisation system would give players the freedom to choose how they would like to play – the two things missing to put this game into serious competition with any other FPS in the market. Hypercharge: Unboxed has a lot of potential, and if manages to give players a bit more control over how they wish to play the game, it just might become one of the best coop titles of recent years.