Street Fighter IV is ready to remind every gamer why it’s the "king of fighters."

23 July 2008 | By Dakota Grabowski
Having played Street Fighter IV for the past week on the Xbox 360, it’s clear that Capcom has put together a great fighting game that lives up to the franchise's reputation. When you jump into your first bout, you should feel the warmth and love that the series has continuously brought.

With 25 warriors having the same desire to be the best of the World Warriors, Street Fighter IV employs a huge character roster for gamers to play with. From newcomers such as the legendary martial arts master of Ryu and Ken, Gouken, to longtime veteran Gen, there’s dozens of possible match-ups that should thrill hardcore fans of the series.


The new Focus system being implemented is going to surprise fighting fans with how well rounded the techniques are. Whether it’s through offensive or defensive maneuvers, the Focus system is very simple to use as you can use it as a stand-alone attack or to cancel special moves. The game engine is truly flexible; it should be adored by long time fans and even newcomers as a Focus attack and Ultra Combo can be pulled off with out too many complications.

Having said all that and played through all the characters represented in the preview code for the Xbox 360, I’d like to present to you a quick look at each character and their strength based on a tier system. As a quick side note, the following characters weren’t available in the preview build: Gen, Rose, Cammy, Dan, and Fei Long.

Ryu:
Having retained his Hadoken and Shoryuken, Ryu is going to remain one of the favorite fighters for competitors. Mastering his maneuvers is a cinch and setting up his attacks, such as utilizing his sweeps, players shouldn’t have trouble gaining full control of Ryu’s true power.

Sagat:
This hulking giant is back and out to get revenge against Ryu. His maneuvers are basically the same with High and Low Tiger Shots along with the Tiger Uppercut and Tiger Knee. All four moves are easy to pull off and stringing them together for successive combos are simple. As for his Super Combo and Ultra Combo, Sagat’s combos don’t vary too much in terms of controller input. Sagat should be an easy character to master, so thus, he’s catapulted into the top tier. Some may even dare label him as a broken character.

Akuma:
After being labeled broken for so many years, Street Fighter IV is attempting to tone down Akuma and make him much more playable. Having a laundry list of maneuvers that aren’t overwhelmingly complicated, but time consuming, Akuma once again is a powerful character to use.

Gouken:
In his debut, Gouken is set to make waves with his powerful and forceful attacks that are based around self-defense. Charging up his Gohadoken and then following up with the Forbidden Shoryuken has torn up the computer opposition that I’ve faced time and time again. It’s too bad he doesn’t like using the Shoryuken or Hadouken as he removed them from his arsenal because when he does accomplish the attacks, he’s a force to be reckoned with.

Ken:
Similar to Ryu, players who learn either character will be able to become an expert with the other. Ken tends to be a little faster, so the choice between him and Ryu is up to the player; either way, you’re still making a smart decision picking either character.

Rufus:
As probably one of the most interesting additions to Street Fighter IV, Rufus is a combatant that’ll keep his opponents guessing. His Galactic Tornado and Messiah Kicks are appealing on the eye and are hard to play defense against since he’s a crazy kung fu fighter. If you learn how to combo into his super and ultra, then you’ll be a deadly force in online tournaments.

Guile:
If, and when, players get into their rhythm with Guile, it’s a sweet thing to see in motion. He’s still got his Sonic Boom and Flash Kick, so he’s all set for gamers who have been fans of him since Street Fighter II. If you truly are an expert with Guile, you’ll be performing a Sonic Boom straight into a Flash Kick to keep your opponent on their heels throughout the whole match.

Chun-Li:
Always a fan favorite, Chun Li’s speed remains in tact but she’s not as bouncy on the screen as she used to be. The screen bounce isn’t as easy to accomplish as it was in past iterations, but her usual maneuvers are found within Street Fighter IV. From her Spinning Bird Kick to her Hyakuretsukyaku (a.k.a. lightning kicks), Chun Li is still a great fighter to throw fighters off their groove with her elegant jumps and combos.


M. Bison:
Armed with his Double Knee Press and Psycho Crusher, M. Bison is once again a charge based fighter who dishes out a lot of damage in a matter of no time. If you can execute both his Super Combo and Ultra Combo (they require charging), then you might find yourself as an unstoppable force – but if you can’t, M. Bison could end up being a difficult character to use.

Zangief:
Take full advantage of Zangief’s Spinning Piledrive and Flying Power Bomb, Zangief is able to dish out a lot of damage with only one or two attacks. Many of his attacks require for you to go in a circle motion with your joystiq/d-pad, so he’s a hard character to master as a newcomer when he has no projectile attacks. But once you are able to learn his special moves, your opponents will run in fear.

Balrog:
In the Street Fighter universe, Balrog killed an elephant with one punch so you can understand why Capcom continues to make him a powerful character. Outside of his one maneuver that isn’t charged based, Balrog is a fairly simple character to use. The problem is Balrog’s defense is atrocious and if you get trapped by a projectile fighter who is keeping the distance on the screen, you’ll be in a world of trouble.

Seth:
Slow and somewhat difficult to control, Seth is a character full of copied moves from other characters. Whether it’s Dhalsim’s Yoga Teleport or Guile’s Sonic Boom, he’s full of familiar moves but has too slow of speed to go to town on your enemies. His Super Combo is effective as it sends his enemy into the air after successive uppercuts. Though, newcomers will have to beware as he’s a hard character to start out with.

El Fuerte:
Crazy and unpredictable, El Fuerte is a fun character to use as he’s all over the screen. The downside is that he’s not all that powerful and doesn’t have great defensive moves. But if you want to throw off your opponents who like to stick at the far end of the screen throwing fireballs, then El Fuerte will surely surprise them if you know how to properly use him.

Blanka:
The violent beast is back and he’s ready to literally shock the world. His speed is still amazing to use, but as a charge based character, I don’t see too many players using Blanka to his full potential. His Electric Thunder is here for novice users to use against players who like to constantly fight in close quarters, but outside of that, newcomers won’t be able to see how great Blanka could be if used correctly

E.Honda:
Capcom has shortened his reach with his Hundred Hand Slap and made it more difficult to perform his Sumo Headbutt, but that won’t stop players from attempting to use their beloved sumo wrestler. I found him less appealing to use than he was in previous games, but his maneuvers still pack a lot of power behind them.

Vega:
Having always been one of the “cool” characters to use, Vega is a specialty character that isn’t much of a fighter without his claws. He can still use his Izuna Drop effectively, but Vega should be used by only the elite players as he’ll get torn up by higher tier characters when used by accomplished players.

Sakura:
Being a pupil of Ryu, Sakura has a lot to learn in the world of Street Fighter and shows traits of becoming a superb World Warrior in SFIV, but I wouldn’t recommend new players jumping the gun to use her right off the bat. She has one of the smaller Hadokens (though she can charge it) and is one of the faster characters in the game that can make something out of their kicks, but she’s not imposing enough to recommend new players to start off with.

Crimson Viper:
Having her ground projectiles and excellent jumping abilities, Crimson Viper is one tough cookie to crack. She’s elusive with her attacks and is surprising when performing her combos, but her attack damage isn’t relatively high in comparison to other characters and she takes a lot of damage in return. She might end up being one of the new favorites as some view her as a broken character, but time will only tell.


Dhalsim:
To use Dhalsim to the extent of his power, players will need to master his Yoga Teleport. The maneuver isn’t the easiest to learn, but once players understand Dhalsim’s strengths, it’ll all be downhill from there. His Yoga Fire and Flame seem to be have been downgraded in size and reach. But in the hands of a pro player, Dhalsim could be a commanding character to use.

Abel:
His attacks are based around throws and grappling, so that fact alone will turn off many fans since he’s going to be a hard character to use. Once you get on a roll and figure out his combos, Abel could easily move up into the middle tier, but he’s not made for novice users.

Check back on February 17 for our full review when Street Fighter IV releases for the Xbox 360, PlayStation 3 and PC. 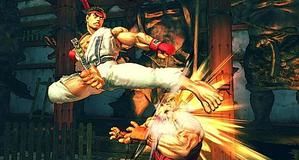