04 July 2011 | By James Day
Being a top down arena-based car combat title, Wasteland Angel is unabashedly an old-school experience. Heck, developer Octane Games’ own website describes it as a “nostalgic throw-back to the era of vintage arcade shooters”. The twist here is the greater emphasis on defensive rather than purely offensive play.

Set in a Mad Max style post-apocalyptic United States, the remnants of humanity are clustered together in several small towns. The less desirable elements of the world, such as the mutants born of nuclear fallout, are intent on whisking away as many innocent civilians as they can. Only the titular tough girl Angel and her tooled up car Gypsy stand in their way.

The focus here is on straightforward arcade shooting and high scores. While your core objective is to prevent as many townsfolk from being stolen away as possible, it ultimately becomes about blowing away each enemy wave as quickly and efficiently as possible for maximum points.

Enemy vehicles come in three flavours: Slavers, large trucks that attempt to capture your civilians; Killers, armed dune buggies whose aim is to attack you directly and Duals, small buses that can fulfil either role. Each enemy vehicle doesn’t take much sustained fire to destroy but in later waves you’ll be faced with large numbers of them.

Power-ups come in the form of upgrades that can raise the power of your basic machine gun weapon. Secondary weapons can also be picked up such as an EMP which temporarily disables all enemies onscreen. Land mines and napalm are particularly useful, allowing you to place destructive traps down in preparation for the next enemy wave. Standard health, armour and bonus point drops round out the list of potential power-ups dropped by destroyed enemies.


Each stage features a boss battle which temporarily pushes the town defence aspect aside for a confrontation with a massive opposing vehicle. From what I’ve seen these fights amount to saving up a specific power-up that the boss is weak against and unleashing them at the right time. Hopefully, these encounters will become a bit more diverse as the game progresses, encouraging a range of different tactics.

Further variety comes in the form of bonus rounds which take place from a first person perspective from behind the wheel. It’s refreshing to take on objectives that are different from the status quo like checkpoint races and a survival mode. However, the maps and the graphics engine were clearly not designed to be experienced at ground level so this alternate perspective is currently more than a little jarring.

Though the game’s Story Mode is very light on actual plot, it is nicely presented in the form of motion comic panels with some decent voice acting. Unlike some games that use these (MotorStorm Apocalypse comes to mind) Wasteland Angel takes a minimalistic approach, letting the excellent art tell the story and not overstretching its bounds by overly animating them.

The game features eight areas each with a couple of town defence levels, a boss fight and a bonus stage. It features four difficulty modes and online leader boards, so if you’re the type obsessed with high scores there looks to be a decent amount of replay value for you here. Some kind of multiplayer, even if it were two player co-operative play, would have been nice though.


Developer Octane Games and publisher Meridan4 have been somewhat cagey about when and on what services Wasteland Angel will be released. Our preview build was based in Steam so it’s a good bet that Valve’s downloadable service will be one way to get hold of it when it launches sometime this summer.

Most Anticipated Feature: While the core game play is pretty repetitive, the boss battles and story have the potential to spice things up over the course of the game. 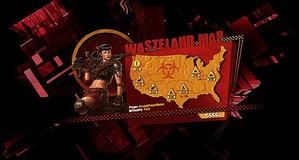