A Game Of Thrones - RPG

When Chris Capel plays the Game of Thrones, he either wins or he goes and watches the TV series instead

Wow, those last few episodes of Game of Thrones were fantastic right? Really gets you buzzed to go out there and play an excellent fantasy RPG featuring intrigue, betrayal, sex, murky morals, understandable villains, flawed heroes, and maybe a dragon. Well good news, The Witcher 2 is available now on PC and 360! Oh, wait, there’s an actual Game of Thrones game out as well? Does it meet those standards too? Well, apart from the dragon, and the “excellent” part...

I’m not going to beat around the hedge knight here, Game of Thrones is a fantastic series of books, an incredible TV series, but a less-than-stellar game. You really should not be considering buying it unless you’ve played a number of other similar, infinitely better RPGs first – most notably Dragon Age: Origins and The Witcher 2. Nevertheless, that does not mean you should discount Game of Thrones: The Game completely.


At the top of reasons why: the world. George RR Martin’s Westeros is unlike any other fantasy world, mostly because it keeps the actual fantasy to a minimum. Dragons and the zombie-raising White Walkers are considered myths, magic is often illusion and barely features, elves, dwarves and other non-human races don’t appear at all, and it’s all very adult and gritty. Characters can die at any point, usually when you least expect it. As a fantasy RPG videogame this is all very refreshing (especially the lack of dragons which both Witcher 2 and Elder Scrolls have fallen prey to), and developer Cyanide have respected all the rules George RR Martin has laid out. Okay, it bends some rules slightly, but only to make it a better game.

Following strongly after this is the story. Set before and over the events of the first book (or first season) but not directly retelling any of those various plotlines, Cyanide have instead opted to tell a new story from two angles. The two protagonists of this tale are Mors Westford of the Night’s Watch and Alester Sarwyck, the estranged son of a prestigious family and priest of the fire god R’hllor. Both sides appear at first to be completely separate (with one being several months behind the other) but then slowly begin to influence and coalesce together.

While the plot starts off slow, with Mors tasked with finding a girl and Alester trying to reclaim his family name, it soon begins to build into one packed with all the intrigue, violence and surprises that make the show and books so entertaining. Honestly. There are twists, betrayals, and happenings here that I honestly didn’t expect. Just when you think things are going to be wrapped up they go to hell – that’s Game of Thrones in a nutshell, and the best thing about GOTTG is that it continues this admirably.

Even better, GOTTG is one of the few games that properly attempts to incorporate player choices into the narrative, and have the consequences play out later on. Furthermore unlike every game but this and the two Witcher titles your choices don’t fall into simple “paragon and renegade” decisions, and the consequences are never obvious. For example, spare the life of a seemingly innocent girl and she might warn the dozen guards outside the room, but kill her and you lose a life-saving hostage later. While these choices never quite reach the level of Witcher 2 in scope they do add a lot to your involvement with the story. Frankly I applaud any developer that attempts to follow CD Projekt’s polished footsteps, and it’s nice to have another Witcher-like game out there.

Where the storytelling falls apart unfortunately is with the voice-acting. It’s utterly awful, honestly like they just dragged in some English speakers from off the street. The older characters in particular don’t seem to have even read their lines beforehand. You get used to it after a while, but the lack of emotion in certain key scenes really dampens their impact. Concerning the TV series, the actors for Varys (the Spider), Queen Cersei and Jeor Mormont appear, but apart from Conleth Hill’s silky Varys they seem to have recorded their lines over the phone.


And the first great part, the world, sadly doesn’t go unscathed either in its translation to game. The Wall, that great ice barrier at the top of Westeros, is suitably impressive, but there’s nothing really to do there. In fact, that’s the main problem with all the locations – there’s not enough life in any of them. People converse but you often can’t join in, and even the sellers say absolutely nothing. You can wander around the entirety of King’s Landing and not be able to do actually anything. There’s hidden coins to find (none of this ‘junk’ nonsense, most things you pick up just turn to coins) and occasionally someone to talk to or get a quest from, but it’s all too rare.

That’s GOTTG’s biggest problem: the almost total absence of side-quests. Which is a shame, because the very few that are here are actually pretty good, like finding a traitor in the Night’s Watch using trickery, bribery, and Mors’ dog to track scents. They’re the best way to imbue life into game locations and persuade players to explore, and there’s simply not enough of them here. Shame.

In actual gameplay terms GOTTG will be divisive. Don’t expect a hack-and-slasher action RPG. The controls and combat both hark back to old-school RPGs, both in good ways and bad. I personally like the combat, which works in a similar fashion to Knights of the Old Republic or Neverwinter Nights 2, where you mix between attacks, items and special powers that cost energy. It’s all real-time, although time slows when you call up the powers menu. You unlock powers and skills for both Mors and Alester as you go, and certain powers require certain traits (like one-handed swords) or enemy states (like Burning, Stunned or Bleeding) to work. It’s all very involving, and compared to the frustrating system used in Risen 2 it at least stays enjoyable all the way through. Well, mostly. You are just fighting the same enemies all the time really, and don’t even think about picking a ranged weapons class.

There also a stealthy sub-game involving Mors’ dog, which you can control to either sniff out scents or rip the throats out of unsuspecting enemies. It’s quite fun, although ridiculously no-one notices a dog pulling lumps of flesh off the neck of their now very dead friend two metres away. Alester merely gets “the light of R’hllor” that allows him to highlight hidden objects. Not as fun but vital.

Control-wise though on the PC I was astonished to discover that you need to hold the right-mouse button to move the camera, something I’d hoped had disappeared forever. You have to left-click items or characters in the world to ‘use’ them, instead of a simple Use Key. You get used to it after a while, but seriously – why is it here? It just frustrates.

Game of Thrones: The Game gets numerous things right but then stumbles on some massive hurdles. The story is great with many unexpected twists, the combat is fairly entertaining, and the attempts at creating a choice/consequence system like The Witcher’s is laudable. Characters are all deep shades of grey and have hidden secrets and depths, and the consequences of your decisions are rarely obvious. Trouble is, the utterly atrocious voice-acting robs the story of a lot of its weight, and the few TV actors don’t help matters with their phoned-in performances.


The worst thing about GOTTG though is that George RR Martin’s land of Westeros feels utterly flat and lifeless. Drab graphics, barely any side-quests or people to talk to (and why would you want to when the acting is so bad?), with cities merely a maze of boring passages. With the TV series rivalling the Lord of the Rings films in terms of effects it’s sad that the game can’t even show King’s Landing in full or even use the aware-winning title sequence from the show (although the theme tune is present on the menu screen). There’s not enough to explore and not enough of a reason to do any exploring. What’s the point of going to a whorehouse if you can’t even talk to the receptionist?

If you’ve played through The Witcher 2 and are hankering for another similar experience, and don’t mind a budget-feeling title, then Game of Thrones is well worth considering. It may screw up a few major things, but I definitely ended up preferring it to Risen 2: Dark Waters (even though they share the same score). That was made by veterans of the RPG genre – this is from a team whose most notable title is Pro Cycling Manager. I’d call that an achievement.

The wedding scene between boo-hiss bastard (literally) Valarr and Alester’s sister. It doesn’t end well, in the most unexpected and shocking ways possible.

A GAME OF THRONES - RPG VERDICT

If you’ve played through The Witcher 2 and are hankering for another similar experience, and don’t mind a budget-feeling title, then Game of Thrones is well worth considering. It may screw up a few major things, but I definitely ended up preferring it to Risen 2: Dark Waters (even though they share the same score). That was made by veterans of the RPG genre – this is from a team whose most notable title is Pro Cycling Manager. I’d call that an achievement.

The wedding scene between boo-hiss bastard (literally) Valarr and Alester’s sister. It doesn’t end well, in the most unexpected and shocking ways possible. 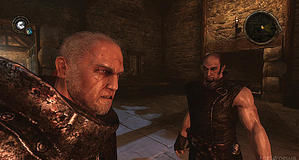 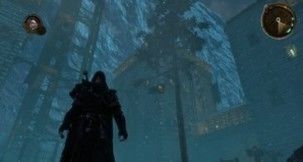 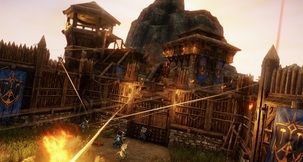