A Story About My Uncle

A Story About My Uncle Review

Every child longed for the ability to fly and In A Story About My Uncle you can do just that. But is it as good as you imagined?

At first glance, A Story About My Uncle’s developer Coffee Stain Studios may ring a bell - perhaps the sort of bell found tethered around an antelope’s neck - as the Swedish developer is the team behind the slightly insane Goat Simulator. A Story About My Uncle is no less out there in its approach, however still manages to maintain a strong sense of believability even within the bounds of its profoundly makebelieve narrative, making this a very intriguing and equally worthwhile three dimensional first person platformer.

Another entry into the increasingly popular non-combative exploratory genre, A Story About My Uncle begins with its protagonist, and narrator of the game, putting his daughter to bed. She begs for a bedtime story based around an adventure, and our hero duly obliges with a tale from his youth: the time when he set out to track down his intrepid and adventuresome, and at that time missing, uncle. What begins with a fairly run-of-the-mill introductory section comprised of snooping around an abandoned workshop, quickly dives head first into the realms of childhood fantasy after the young hero claims an ‘adventure suit’ designed by his uncle, and is transported to an alternate dimension after stumbling upon a teleportation device in a secret observatory.


Floating islands lined with obscure and mysterious glowing hieroglyphics precede dark chasms, floating cities, and icy temples as our nameless frontman plunges from great height into the new world’s depths, spared from injury by his newly acquired magical mechanical ensemble. His suit, equipped with a power-infused glove, allows for boosted jumps, sending our hero metres into the air, whilst a single-use plasma grappling line can be deployed onto any susceptible surface, hurtling him in any such direction.

A range of combinations can, and often must, be utilized in order to overcome the myriad of obstacle course-type challenges which lay afoot from the outset, such as coupling sprint with the powered leap, thus thrusting the player off sheer cliff faces; free-falling in turn towards the next ledge. Later on in the narrative, rocket powered boots are acquired which allow for an extra boost forward and upward, and collecting power crystals adds extra grapples per jump; all of which facilitates extra challenging parkour as the obstructions gradually match the player’s ability.

Quite often such freedom leads to brutal misadventure, however dusting yourself down and instantly resuming from the generously well-paced smattering of checkpoints becomes more of a joy than a hinderance, for the freedom of flying through the air and successfully landing that often attempted jump is a brilliant feeling - one testament to the game’s ultra tight controls. As the game progresses, these moments get steadily more difficult, yet in turn even more rewarding, as the player must negotiate the path of orbiting rocks, hitch rides from the vanes of giant windmills, and lasso shattering cave stalactites whilst flying through the air, all in search of Uncle Fred and his trail of flare-ridden abandoned campsites. It truly is the stuff of childhood dreams.


This technical bravado is offset by a fairly lighthearted and fairytale-like plot as the young hero quests to find his lost relative. Although the characters he stumbles across en route are distinctly and unashamedly whimsical - Maddie a particular gem from a colony of ‘salamander-like’ beings of whom Uncle Fred has been escaping to - there are some serious underlying themes such as the process and potentially life changing decisions associated with the coming of age, and the understanding and acceptance of foreign creeds and cultures; both of which the game pulls off with aplomb.

Another area in which A Story About My Uncle excels is a set piece wherein a one-eyed dragon guards a cave entrance the player wishes access to. Forewarned by foreign wall etchings companion Maddie has learned to decipher, those who dare enter the tarragon’s lair must remain still whilst the dragon casts its eye over its lair. What this means is that when the beast intermittently rests its eye, Maddie and the protagonist must make a dash to the next ledge or platform without being seen. By standing still, the monster fails to spot the player, however if even the slightest movement is detected, the player is blown over the edge to their doom.

Although the game is a distinctly soothing experience in its entirety, this moment of defined panic adds a certain level of urgency which wouldn’t have went amiss elsewhere. In fact, it somewhat feels like developer Gone North missed a trick by failing to implement this level of pressure, ergo excitement, elsewhere. Furthermore, as A Story About My Uncle drives on, a fair bit of the initial intrigue is lost as the overarching narrative is almost completely abandoned, bar the continual search for the player’s uncle, further outlining the possible upside of added enemy encounters, albeit within a combatless exploration game.


Although technically not a puzzle platformer per se - for there are no generic solve this, unlock that type puzzles - there were several situations throughout A Story About My Uncle’s modest two and half hour campaign where I was left scratching my head, with no real clue of where I was supposed to be going. Mid air trial and error regularly made for some less than orthodox clairvoyance, however these scenarios still required a certain degree of problem solving nonetheless, in ways at times comparable with the genius of the Portal series, infused with the athleticism of Mirror’s Edge/Spiderman, and the exploratory intrigue of Gone Home. Not a bad combination at all, particularly against the game’s beautifully designed environments.

A STORY ABOUT MY UNCLE VERDICT

Unfortunately, the last quarter of A Story About My Uncle does become a little too repetitive, and slightly overly obscure grapple set pieces require blind luck more often than skill. That said, this is still a great adventure - one which will return you to childhood fantasy, and one which will far from get your goat.

Believing you can fly.

A Story About My Uncle Essentials 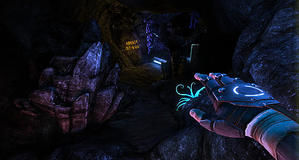